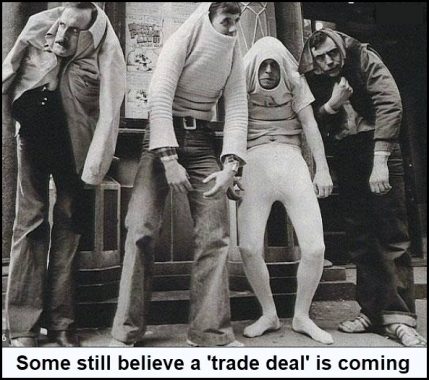 Just for fun, I often try to guess why stocks supposedly have gone up or down on a given day before checking to see how the “experts” have explained it. Half of them appear to be card-carrying imbeciles; the other half, pathetic dolts whose job requires them to explain the stock market’s wacky gyrations in pack journalism’s agreed-on terms that all of us supposedly can understand. Let me suggest that you save your breath, guys, because you will never, ever get it right, unless by accident. For in demonstrable fact, stocks fluctuate for reasons that none of us will ever fully comprehend. Technical analysis accepts this and moves on, and good technical analysts calls the turns correctly without claiming to know why or how. Suffice it to say, mysterious cosmic forces cause stocks to fluctuate.  Seen from the perspective of my own forecasting system, stocks fell for the last two days and are threatening to keep falling simply because the broad averages had reached potentially important Hidden Pivot rally targets. They were billboarded here as early as six weeks ago, and so far they’ve caught tops in the S&P 500 and the Dow Industrials within hundredths of a percentage point.

So what are the aforesaid imbeciles and dolts saying about this decline?  You guessed it! It reflects “fading hopes” that the U.S. and China will successfully conclude a trade deal. Of course, even the imbeciles cannot believe such claptrap any longer, and both they and the dolts must realize by now that the talks are being stage-managed to drag on till the end of time. To fully appreciate how stupid trade-deal spin has become, we need only consider that the stock market is trading higher than it was before the tariff war began. Shares mostly rose while the matter remained unsettled, stumbling only momentarily when China appeared to tell Trump there would be no deal. But even that downer has lost its hold on Wall Street’s giddy permabulls. In any event, stocks will turn higher when cosmic karma decrees that it is time. This is all but ordained because, as I’ve mentioned here before, and if for no other reason, AAPL must reach a minimum 283.97 before the fat lady sings. When bullish fever returns, so, inevitably, will headlines that say talks with China are back on track. If you actually believe such hogwash, you are destined to be among the multitudes who stay fully invested until the next bear market hits bottom. _______ UPDATE (Nov 21, 5:32 p.m. EST): Demonstrating my point, there was news out last night an hour after we went to press that the trade talks were “on again.” Reportedly, China’s chief trade negotiator invited his U.S. counterpart to meet face-to-face. This world-shaking story gave the trade-desk scumbuckets who work the night shift an opportunity to squeeze index futures only slightly higher before gravity reasserted itself at the opening bell. My gut feeling is that this too-obvious head-fake will only invite more weakness.