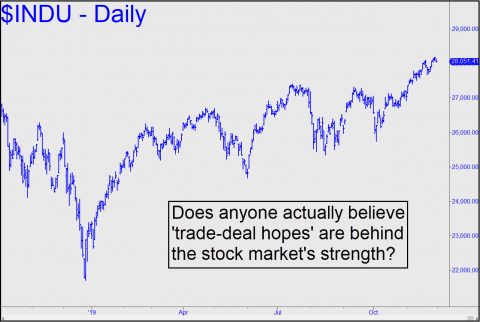 New Year’s Eve will be here in a blink, and we should expect seasonality to continue to favor bulls in the meantime. Not they need any help.  Although the broad averages have exceeded every significant technical impediment we knew of in recent weeks, there is little evidence of fatigue. Late Sunday evening, index futures were chomping on the bit, seemingly eager to extend last week’s moderate gains. By now, the idiotic notion that the bull market has drawn its strength from vague ‘hopes’ of a trade deal should have been dispelled, since whatever deal is coming is certain to be far less consequential in dollar terms than the rally that has already occurred.  The massive upwelling since January has occurred simply because stocks are in a bull market, not because of anything having to do with world trade, politics or the economy. Rather than speculate about whether the bull trend is likely to continue in 2020, let’s wait until February 2, when we can be almost certain about this. That’s when the Superbowl will be played, and the outcome has an 80% chance of predicting the stock market’s year. If an AFC team wins, a bear or down market is likely to follow. The New England Patriots, an AFC team, have the best record in football so far this year (10-1), but it’s too early to despair.