Are You All-In and Brimming with Optimism? 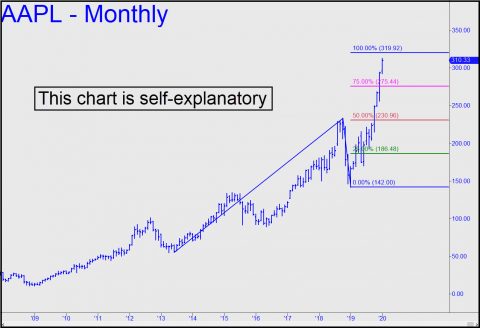 AAPL’s vertical climb since October has grown treacherous, as the chart makes clear. Last week we told subscribers to be alert to the possibility of an important top at 314.28, but now we see another potentially daunting Hidden Pivot resistance at 319.92. These targets, which lie just inches above Friday’s close, are purely technical, but we’ll lay odds that a chartist will come closer to calling the top than some analyst who is paid to invent reasons for shares to move higher more or less forever. As regards AAPL, Rick’s Picks tracks it obsessively because it tops every portfolio strategist’s list of must-owns. Small wonder, then, that institutional investors have continued to pile into just a handful of high-fliers, shunning value stocks as though they were chopped liver.  Apple, Microsoft and Facebook shares, to name three sure things, returned 108%, 60% and 53% respectively over the last twelve months. Why would a portfolio manager glutted with an endless gusher of Other People’s Money bother to look elsewhere?

But since we know that the parabolic rallies in these stocks and a few others cannot continue indefinitely, we might ask: What will cause them to fall? Not ‘fundamentals’, for sure.  Indeed, if AAPL’s price were to be halved over the next six months, it would be because perceptions have changed, not the underlying facts. The new set of facts will come later, when the same geniuses who have been scarfing up FAANG stocks hand-over-fist for the last year see the glass as half empty. It is predictable that this change of heart will come only after the bear market has ravaged investors. But it won’t happen until stocks are halfway to the next bear-market bottom — too late to save the hoards of true believers.

More immediately, if the AAPL rally targets flagged above fail to stop the stampede, keep in mind that shares of RCA, known to the shoeshine boy and his customers during the Roaring Twenties as ‘Radio’, rose tenfold in the five years preceding the 1929 crash. To duplicate this feat, as well as RCA’s subsequent 97% plunge, AAPL would need to hit $1,000 and then fall to $30 in just a few years. That seems unlikely, even if consumers hold onto their iPhones for much longer in the next recession and Apple is unable to make the kind of money in the entertainment business that it has made so easily selling overpriced hardware. Why worry about such things now? Well, there is that chart. But if it speaks to you and says that AAPL’s best days lie ahead, then you are probably all-in already. What could it hurt, though, to take some money off the table? _______ UPDATE (Jan 13, 4:34 p.m. EST): One target down, one even better target to go: 319.92.  AAPL blew past the former with such disdain that one might have thought the stock is on its way to $400.  Maybe. But let’s see first how the thundering herd handles 319.92. Even considering how easily it took out the lower number, I’ll be surprised if we don’t see a tradeable top somewhere in the vicinity — meaning within $1-$2 — of the second.