Iran Retaliates, Killing None but Scrambling Stocks and Gold 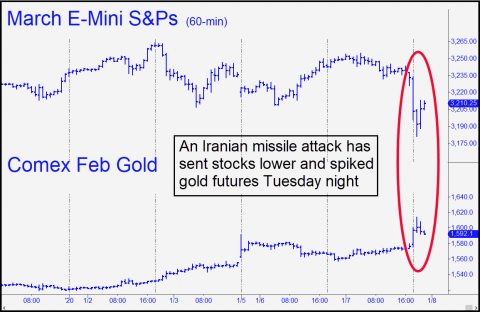 Stocks are getting pummeled Tuesday night following an Iranian missile attack on a U.S. military base in Iraq.  Index futures are down more sharply than they would have been if the story had broken during the regular session. But with the second- and third-stringers working the trade desks and an absence of liquidity, they had no choice but to let stocks fall as steeply as possible without having to buy too much of it on the way down.  Whether the attack turns out to be the start of World War III remains to be determined, but my hunch is that traders will take the optimistic view and reverse the onslaught shortly.

In the excitement, February Gold spiked above a 1605.90 target we’ve been using since December 12, when the futures tripped a buy signal at $1491. Tonight’s towering high at 1613.30 has been followed by a selloff to 1592.20 so far, but we should expect bulls to hold their own over the next few days as Wall Street feigns sufficient nervousness and concern to appease the news media.  If Iran continues to attack, perhaps even killing an American, that would likely be sufficiently disturbing to push gold above tonight’s peak. However, Iran apparently recognizes the danger of trying this, since its fusillade reportedly did not target American troops. They can be such nice guys when they know how easy it would be for the U.S. to bomb their power supply into oblivion. The mullahs could turn out to be paper tigers — and wouldn’t that be bullish for the world! _______ UPDATE (Jan 8, 10:05 p.m. EST): Hey, guys, let’s not overdo it! Ebullient buying has goosed the Dow 750 points above lows recorded Tuesday night. A corresponding selloff in gold has been equally extreme, shaving $60 from the recent peak. Even so, both trends seem likely to continue for at least another day, since they have outstanding Hidden Pivot targets respectively above and below Wednesday’s closing levels.