Is Copper Signaling the Return of Inflation? 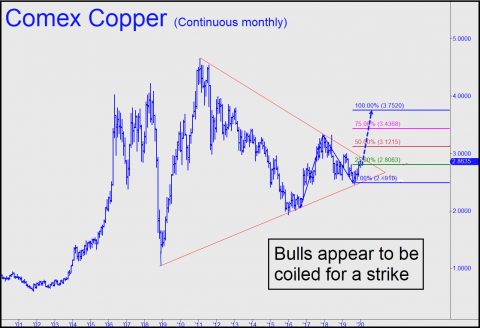 I’ve been a hardcore deflationist for so long that it took a wake-up call from the always astute Jesse Felder to jolt me out of my complacency. His latest report is headlined Dr. Copper Could Soon Deliver a Diagnosis of Inflation, and it’s an eye-opener. The chart accompanying Felder’s think-piece suggests that copper futures have been developing thrust for the last several years that could launch a steep rally. He uses a pennant formation to show this, and the breakout point on his chart would come at around $2.95 per pound if it occurs this month. I have illustrated his pennant in the chart above with red lines.

My perspective is somewhat different and uses the Hidden Pivot Method to extrapolate a breakout at exactly $3.12 per pound. Any higher, especially if the futures can close for two consecutive months above that price, would be very bullish. But even someone with no knowledge of technical analysis can see that all signs point higher, with many uptrends of varying degree in play simultaneously. My technical runes say that a strong breakout to the upside would have the potential to push the price of a pound of copper as high as $5.33. If so, the corresponding inflation we might expect to see in the price of goods and services would be severe and a jolt to the global economy, especially since inflation has lain dormant for nearly 40 years.

‘The Doctor’ Is Usually Right

Concerning copper’s ability to predict inflation, I’ll let Felder explain:  Traders call copper ‘Dr. Copper’ because he has a Ph.D in economics. In fact, most of the time, Dr. Copper forecasts recessions and recoveries, inflation and deflation, far more accurately than his colleagues in the ‘dismal science,’ so it pays to pay attention to his macroeconomic messages.  Just so.  And although I continue to believe that a deflationary endgame for the global financial bubble is unavoidable, if copper were to bolt sharply higher I would have to concede that the deflationary bust I’ve been anticipating for so long may lie further down the road. Regardless, the potential for a catastrophic outcome, presumably but not necessarily deflationary, would remain. That’s because steep inflation would push interest rates high enough to implode the global debt bubble, a quadrillion dollar credit edifice that is fatally addicted to low rates and which could not adjust to a sudden, 100-basis-point upthrust, let alone entrenched rates of 5% or more. _______ UPDATE (Jan 21, 9:56 p.m.): Doc Copper took a flying dive on the opening, seemingly validating the notion that a virus outbreak in China could threaten the global economy. If so, it would qualify as a genuine black swan event — i.e., something no one could have predicted ending these boom times.  No question, there will be economic ripples in China, starting with a reduction of their New Year’s extravaganza.  But until such time as the Wuhan bug sickens dozens of people in a few major U.S. cities, it’s hard to imagine Wall Street acting worried for long.