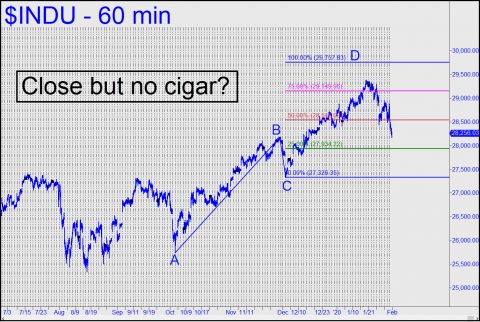 Coronavirus anxiety has replaced trade war anxiety as the one-size-fits-all explanation for the stock-market’s bad days.  Wall Street initially thumbed its nose at the virus threat, staging a strong rally early last week even as the death toll mounted in China.  But when a few cases turned up in the U.S. and airlines started canceling flights in and out of China, investors took notice. Their anxiety became manifest in Friday’s 603-point decline in the Dow Industrials, and no one was suggesting the selloff was climactic. For unlike tariff anxiety, which rose or fell every time Trump tweeted on the subject, the path that coronavirus takes is unpredictable and could remain so until illnesses and deaths either start to taper off or become catastrophic. Will the stock market be able to bide its time, hovering somewhat beneath current levels, until the virus is better understood? That would be the optimistic scenario, especially since the economic fallout from coronavirus has already driven commodities, most significantly crude oil, sharply lower. This could spread more than mere ripples into the economy, since inflated oil prices underpin the global financial system’s hyper-leveraged store of collateral.

A Scary Place to Get Long

From a technical standpoint, it is troubling that the Dow’s seemingly invincible rally sputtered out without having reached the 29,757 target shown in the chart. This is close enough to the milestone number 30,000 that it should be considered magnetic. A case of ‘close but no cigar’?  Wall Street would be forever shamed if the greatest bull market of them all were to die just inches from so obvious and compelling a target.  It will remain viable nonetheless unless the pattern’s point ‘C’ low, 27,326, is exceeded to the downside. I should also mention that, under the rules of our trading system, the Dow would trigger a ‘mechanical’ buy at 27,934, stop 27,326. This would be a scary place to jump in, but that’s what the ‘mechanical’ set-up — one of five that we use to get long or short — was designed to handle. We won’t presume to know how things will turn out this week, but our inclination would be to sell into strength as long as the virus story appears to be waxing.