Optimism, or Just the Madness of Crowds? 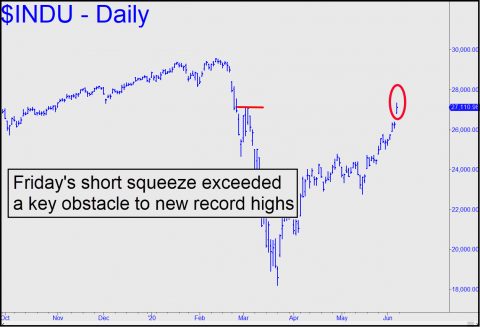 The Dismal Scientists were hard at work over the weekend, cheering the market’s powerful short-squeeze rally as though stocks somehow deserve to be trading at or near-record levels. Speculators evidently were not thinking about the pandemic’s effects on the global economy, only about a statistical blip in job creation that flouts common sense. Who were the buyers? Bored millennials, according to a story posted at Bloomberg. Just the kind of support Wall Street needs, not that anyone cares.

Adults who should know better included economist Ed Yardeni, who saw Friday’s rally as a sign that the “underlying strength of the American economy will emerge intact.” He ought to look around, since a drive through any neighborhood in America will reveal how many business are never coming back. Let the tour start in Manhattan, if he thinks that it is just mom-and-pop stores that have been fatally wounded.

Far from a sign of resilience in the economy. the rally is simply a reflex reaction to a tidal flood of money created from thin air by the central bank. At these absurd heights, stock prices no more reflect economic forces of supply and demand than do Treasury bonds, corporate junk and real estate. The gaseous effusion driving shares is worse than malinvestment on an epic scale, it is inflating a debt bubble that eventually must pop.

Yardeni and many other economists who cannot see the obvious are helping to stoke extraordinary popular delusions and crowd madness that cannot but end with a deflationary bust. It will be catalyzed mainly by imploding valuations for real estate and energy resources that thinly collateralize a quadrillion-dollar derivatives market. Once this financial catastrophe has run its course, it will require a hyperinflation to wipe out the government’s portion of our debts, which have become manifestly unpayable.

The calculus of deflation makes a bust unavoidable; for ultimately, every penny of every debt must be paid — if not by the borrower, then by the lender.   To think that the government can pump trillions of borrowed dollars into the economy without putting a fatal drag on future productivity is absurd. _______ UPDATE (June 8, 10:04 p.m.): With today’s giddy rally, the economic world enjoyed yet another day’s reprieve from catastrophic ruin.  A 354 target in AAPL that lies nearly 7% above these levels would seem to imply that bulls still have some running room. Even more bullish is an outstanding target at 10,571 in the E-Mini Nasdaq.