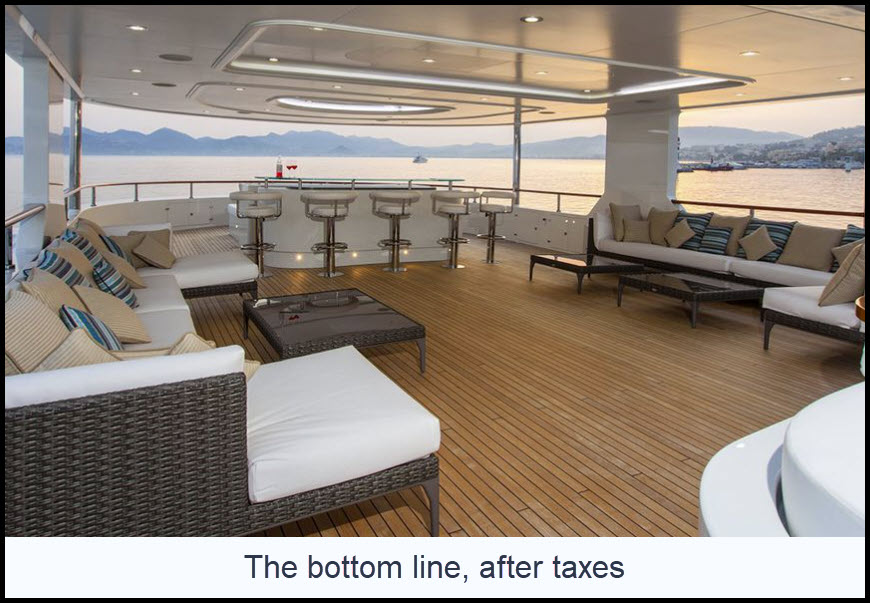 Headline writers hyperventilated last week over the prospect of higher capital gains taxes while the stock market took it in stride. Biden wants to double the levy on long-term investments to 39.6%, ending a felicitous run at 20% that was enacted 40 years ago under President Reagan. The Wealthy Will Fight Him to the Death, proclaimed a teaser above a Los Angeles Times column. And Bloomberg.com hoisted this ‘Mayday!’ above the fold: Rich Americans Face Biden Tax with Anger, Denial and Grief‘. They’ll get over it, as we well know; they always have. And what is the secret of their Zen forbearance? It is this: Make so much money that even after giving half of it to the revenuers, there will be plenty left to summer in the Hamptons and charter Mediterranean yachts without feeling pinched. And now more than ever, there is consolation in knowing that whatever sums The Government’s left hand taketh pales in comparison to what the right hand giveth — namely, ‘stimulus’ that all but promises to inflate asset values to infinity.

In the unlikely event it is enacted, Biden’s proposal would put well-heeled investors in high-tax states like New York and California over the 50% threshold for total taxes paid. The well-to-do have been fleeing to low-tax jurisdictions such as Nevada, Florida and Texas anyway, but a tax hike would undoubtedly hasten the exodus, even of rich Biden backers who disingenuously claim to love Big Government wholeheartedly. In the meantime, although year-end tax selling could increase if talk of a tax hike grows serious, it seems unlikely to faze a bullish herd that has stampeded through a global pandemic and 20% unemployment.

Dramatic headlines aside, the stock market shrugged off the news much as it has been doing ever since the bull market began in 2009. The Dow sold off more than 400 points on the news but closed well off its lows. This set the scene for a mild short-squeeze on Friday that seems likely to carry into next week/month/year. Traders reasoned, correctly, that no matter where wealthy individuals relocate themselves and their savings, they will still need to park their lucre somewhere. One news report gratuitously quoted a guy who thinks higher taxes would make bitcoin an even more enticing investment, if such a thing were possible. Why should that be so? That’s a question the reporter didn’t think to ask, but bitcoin is probably the last place we should look to ‘escape’ higher taxes on capital gains.