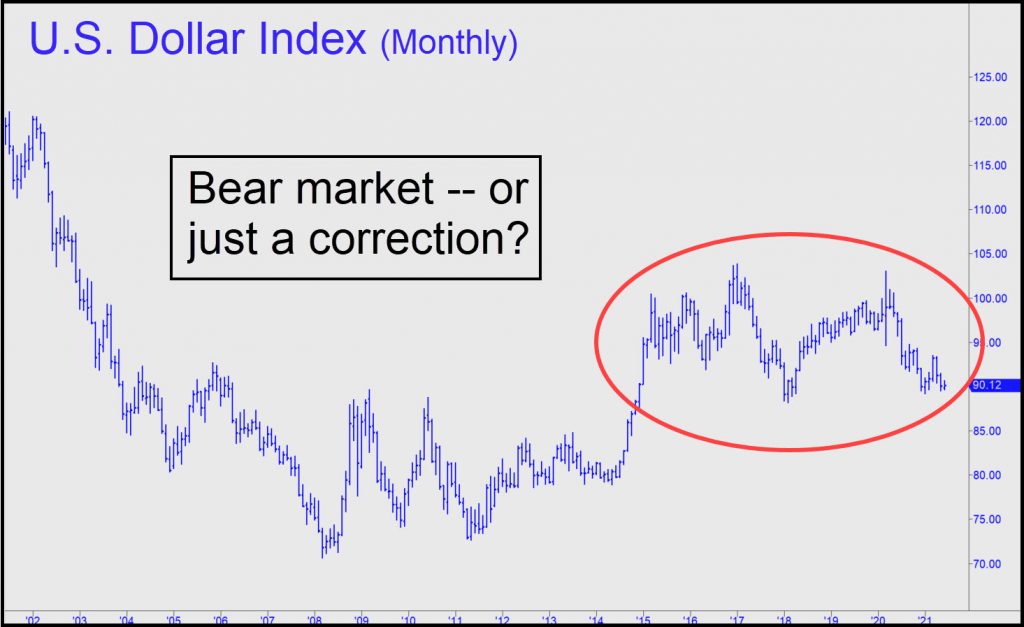 If we’d known the pandemic would trigger the most reckless monetary blowout in history, could anyone have imagined that the U.S. dollar a year later would have fallen by just 14%? That doesn’t even qualify as a bear market, just a middling correction of a powerful bull run begun in 2008, a year ahead of the historic rally in stocks.  The Dollar Index was trading around 70 at the time, about to embark on a nine-year climb to 104 early in 2017.  It subsequently swooned as low as 88 early in 2018 but hasn’t traded any lower since; it’s currently at 90.12. That’s with the Fed showering trillions of dollars in helicopter money on America, a feat that achieved a dubious milestone recently when central bank purchases of Treasury debt exceeded purchases by foreigners. Biden for his part has been ramping up outlandish spending proposals, promoting the timeless Democratic canard that “the rich” will pay for it all. The proposals are likely to grow even more outlandish, since Biden fears that a Republican Congressional victory in 2022 could close the window of opportunity for a fiscal expansion dwarfing FDR’s New Deal.

Stimulus ‘a Drop in the Bucket’

So why do I continue to insist nonetheless that we are headed into a catastrophic deflation? The short answer is that even tens of trillions of stimulus dollars is just a drop in the bucket compared to a deflationary juggernaut poised to suck inflation into a black hole. When the bubble finally pops, here’s a list of things that will deflate like a tire with a hole in it before the central bank has a chance to even attempt a resuscitation:

Can you see the problem?  Not that anyone doubts the Fed’s determination to keep the system liquid at all costs.  It’s just that the central bank’s statutory and logistical ability to do so will be outmatched by the precipitous shrinkage that some black swan is destined to cause.

In the meantime, it is a given that the dollar will continue to sink, pushing the price of everything higher. But don’t confuse this with 1970s-style inflation, when wages and prices interacted to produce a steady rise in both over a period of years. In contrast, today’s inflation is feeding off an asset bubble that could collapse overnight. When this happens we’ll discover that although the Fed excels at Ponzi schemes to fatten investable assets, it is powerless to rescue agencies that spew real cash-dollars continuously. The public pension system, for example. Imagine what will occur when the Treasury starts sending out monthly checks totaling $30 billion or so to retired Illinois workers. Within days, two dozen more states whose pension funds are nearly as bankrupt will line up for their bailouts. Rescuing all of them would be tantamount to hyperinflation — a self-defeating exercise, since, by the fourth or fifth month, a $2,500 check would not even buy groceries.  And well before then, of course, private-pension managers would march on Washington seeking handouts for their clients.

Together, these problems and sundry others will ultimately overwhelm whatever short-lived, nuisance-inflation lies just ahead.  But hyperinflation? That would require the mass epiphany that bogus dollars are about to be printed in such quantities as to render them absolutely worthless. This seems highly unlikely, given that Biden’s rampant stimulus proposals have stirred opposition, including from a few Democrats whose votes would be needed to enact his plans.  There is also the question of where people would stash their money in lieu of holding dollars perceived as sinking fast toward worthlessness. The stock market and real estate are obvious answers, but they are already in bubbles doomed to collapse. Any way you slice it, deleveraging is how this bubble will end.  “Inflate-or-die” policies have just about run their course and will require only a shove from a bear market to go over the cliff. But if you believe that bear markets no longer happen, then by all means, bet the ranch on inflation.