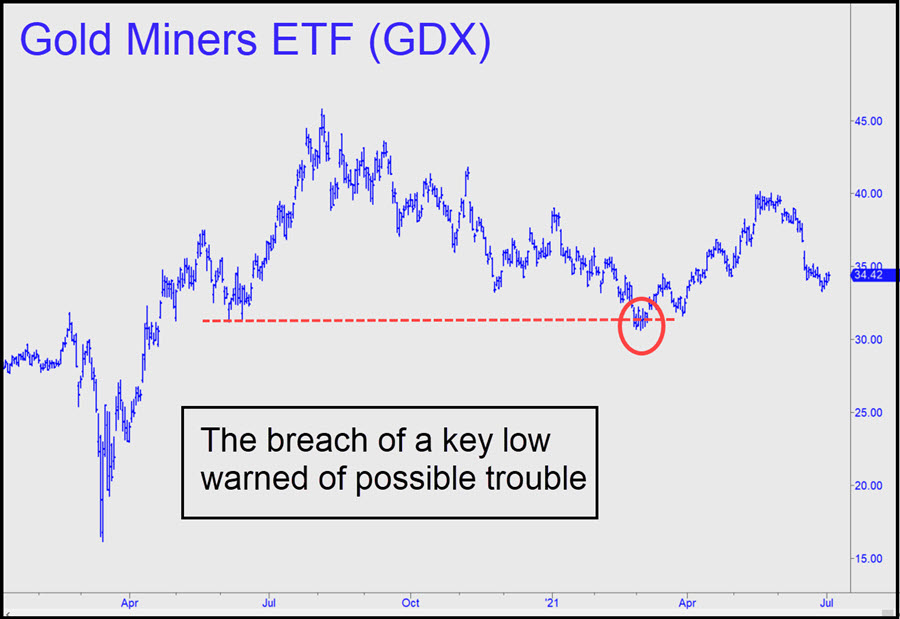 I was premature when I gave the green light to gold bulls five weeks ago.  “If you’re a bullion investor,” I wrote at the time, “you can buy the stuff now without fear or qualm.” Had you taken this advice, you’d have gotten aboard just in time to get smashed in the head, since gold was about to have its worst week in six months. I made my recommendation seem even more foolish by running it under the headline Gold Really Sucks. Here’s Why.  This was just a ploy to grab the attention of gold bulls, since the commentary itself, as readers soon realized, was quite bullish.

So what changed my mind?  I’d like to say that fresh evidence on the charts swayed me. In fact, I actually ignored a flashing-yellow signal early in March, when GDX, the gold miners ETF, breached a key low at 31.22 from nine months earlier. This is shown in the chart, and it created a glow-in-the-dark ‘impulse leg’ that was unmistakably bearish. Unfortunately, my focus was elsewhere, mainly on a few subjective factors that were bound to mislead anyone looking for a long-elusive ray of sunshine in precious metals. For one, I noted, bitcoin was finally getting its comeuppance, presumably freeing up speculative energy for bullion. And for two, there had been no vicious takedowns in gold recently, ostensibly because the bad guys finally realized it was time for gold to start discounting the rising crescendo of inflation fears.  I was wrong on both counts, for gold and silver were about to get hit with their steepest two-day sell-off since November. Further selling mercifully stalled, but the jury is still out on whether another wave is coming.

It took an email from a correspondent to open my eyes to the bearish reality of price action since last August.  The email featured the analysis of someone called ‘Plunger’ who posts on the excellent Rambus Chartology site. Plunger took great pains to separate himself from those who still cling to the notion that bullion’s slide since last summer, punctuated by exciting rallies that died, is merely corrective. It is bear-market action, clear and simple, he wrote, and I find myself agreeing.

The good news is that, whether you call it a correction or a cyclical bear, it is occurring in the context of a much bigger, secular bull market that still has significantly higher to run. Here’s a chart with my target at 2285.  I should also mention that if Comex Gold were to fall a further 24% to the green line – bad enough, probably, to satisfy Plunger — it would generate a ‘back-up-the-truck’ buy signal, based on the rules of my Hidden Pivot System.

So how much lower will gold and silver need to fall before a durable bottom is possible?  Plunger thinks we are nearing the end of bullion’s ‘disappointment’ phase and that a capitulation finale in GDX would be signaled by a drop below the March 2021 low, 30.72. I agree. Thereupon, my worst case would be 27.17, which is not too far from Plunger’s. And my best case?  I could see as little damage as 31.76, or perhaps 29.13.  Plunger evidently does not expect gold bulls to get off that easily, but his commentary seemed open-minded to the possibility — to the possibility, even, that he is entirely wrong, and that gold is about to embark on a huge bull run. That wouldn’t shock me, even if I’ve just acknowledged that the breakout I touted a month ago was more likely just a false start, one of many for gold.