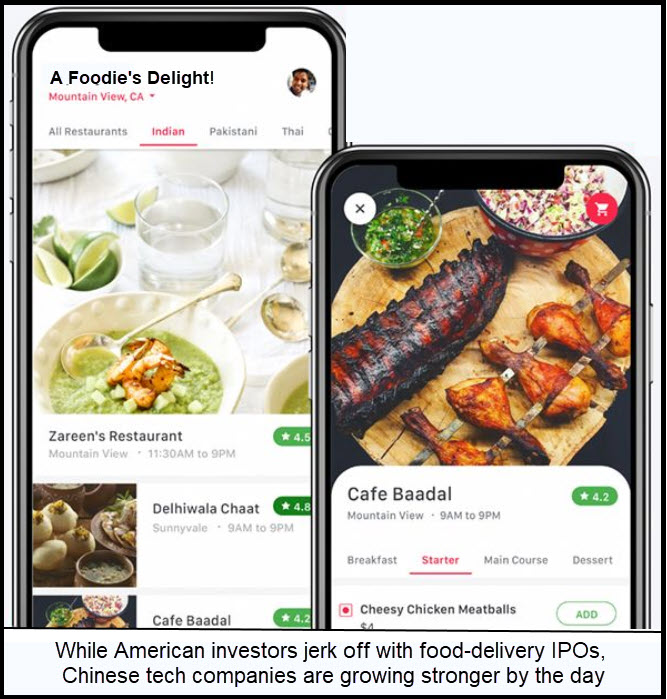 China is easy to hate, since their leadership is at heart a bunch of double-dealing, lying commie rats. (And yes, the evidence is more than a little persuasive not only that they unleashed a deadly virus on the world, but that they took clandestine steps to protect themselves from it before going public with the bad news). There is nonetheless something to admire and even envy in the way China’s leaders have been going about economic reform. For starters, Xi Jinping has declared war on tech companies perceived as having little to contribute to China’s goal of economic, geopolitical, financial and cultural dominance. Not coincidentally, most of the targeted companies are in the same businesses as America’s hottest firms: consumer goods, advertising, real estate, ride-sharing, finance, gaming and entertainment. Xi’s denying Chinese firms in these sectors access to U.S. capital markets is akin to Biden’s issuing a fatwah against glorified ad agencies like Google and Facebook, banning Twitter for incitement and casting out the moneylenders at Morgan Stanley.

The CCP’s clean-up campaign took an interesting — some might say promising — turn last week when they banned effeminate men from TV. It remains to be seen how a generation of children will fare in the relative absence of yin-saturated popular culture, but if it eventually produces a Chinese John Wayne, the West will face an even tougher adversary down the road.

It’s not simply a matter of targeting the kinds of companies we associate with America’s terminal-stage consumerism, income inequality and decadence. The CCP’s reforms are also designed to shift investment capital toward industries positioned to provide a brighter economic future for the Chinese people, and to grow an economically robust middle class. This policy implicitly rejects and rebukes an American-style capitalism that has atrophied to the point where it has become fatally unproductive. I say fatally because U.S. equities markets continue to concentrate trillions of dollars of investment capital in companies like Google, Facebook, Amazon, Apple and Twitter that masturbate Americans, even as high-tech startups that could change the world are starving for funds. I speak from personal experience as an investor in a relatively young Colorado firm that uses terawaves technologies in ways that could revolutionize food safety, homeland security, national defense and healthcare. The company, TeraBAT, has struggled for years to raise a measly $3.5 million dollars even as Wall Street has poured trillions into a real estate bubble, online dating, food-delivery apps, online messaging, driverless cars, social media, smart phones and even donuts.

China has decided it wants no parts of this action and banned what U.S. investors would consider “hot” companies from raising capital in the U.S. For good measure, and to ensure that the supply of human capital is of the highest quality, the CCP has drastically reduced the amount of time kids can spend playing video games. This will never happen in the U.S., and it is yet one more reason why China threatens to succeed where Khrushchev’s Russia failed: in burying us. (Click here for a related interview Rick did last week with Howe Street‘s Jim Goddard.)