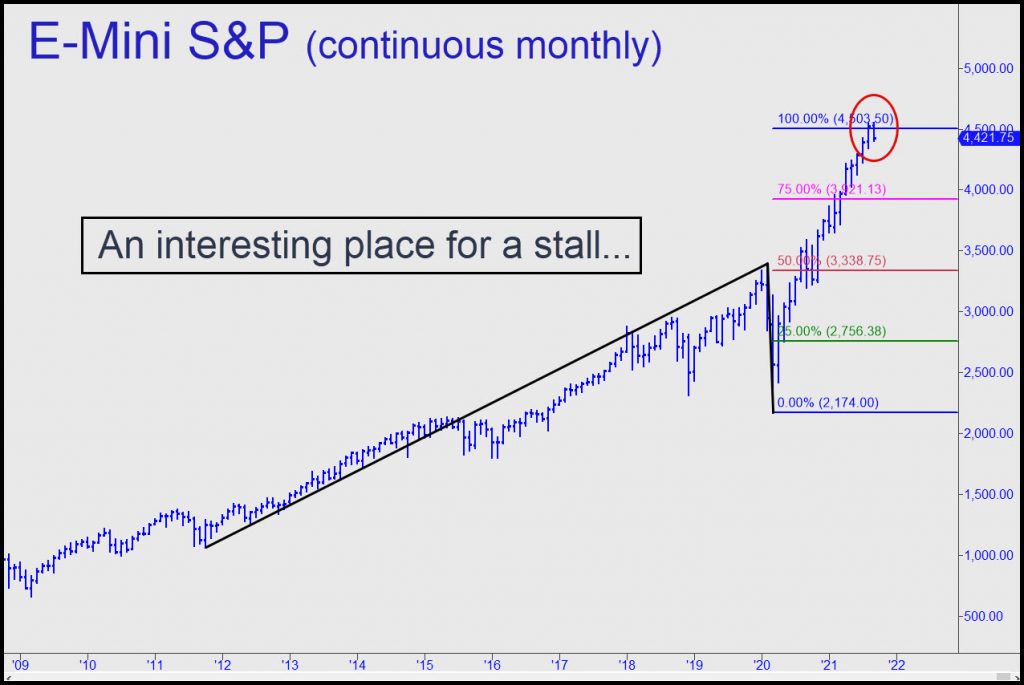 Bears had a rare chance to get short with impunity last week — arguably the first such free-money opportunity since the bull market began more than 12 years ago. With the Evergrande saga unfolding in real time, shares appeared to be doing a Wile E. Coyote ahead of Friday’s opening. Their gravity-defying behavior reflected one of those deft manipulations where DaBoyz greet whatever fragile bids show up in the early going with a feather-light touch. On Friday, playing it by the book, they scaled back their offers until the very last of the idiots from Mars doing the  buying were fully satisfied. The result was that stocks hovered aloft for just long enough that traders who had gotten things exactly right — i.e., realized that Evergrande‘s failure could make the 1998 collapse of Long-Term Capital Management look like a furniture-store liquidation — must have begun to doubt themselves.

It was only after the opening bell that they came to their senses with the apparent realization that any selling done on Friday was all but certain to look fortuitous come Sunday evening.  Stocks began to fall, but not nearly as steeply as they are likely to fall in the days, weeks and months ahead. Indeed, I am publishing this commentary ahead of Sunday’s resumption in trading to drive home my point, which is this: Evergrande’s imminent implosion could turn out to be the biggest speculative collapse in history. It is going to take down many big players, causing a chain reaction that will definitively end the buying mania that has gripped shares since Covid-19’s “bullish” failure to put civilization into eclipse.

Up to Their Eyeballs

For now, don’t believe talking-heads blather about how Black Rock, Goldman Sachs et al. hold only relatively small stakes in Evergrande.  The truth is, when you connect up the dots, toting up derivatives exposure tied to Evergrande’s epic real estate portfolio, they are all in it up to their eyeballs. Traders and investors should therefore treat every rally as a gift, and every Wile E. Coyote pause in selling as an anomaly. The tempo of the selling is certain to accelerate, and short-squeeze rallies to grow more violent; it will be increasingly difficult to get short. But there should be little doubt that bears have finally got the wind at their backs. The chart above shows that they have some technical support as well, in the form of a recent E-Mini S&P top at 4503, a Hidden Pivot rally target that was a decade in coming.