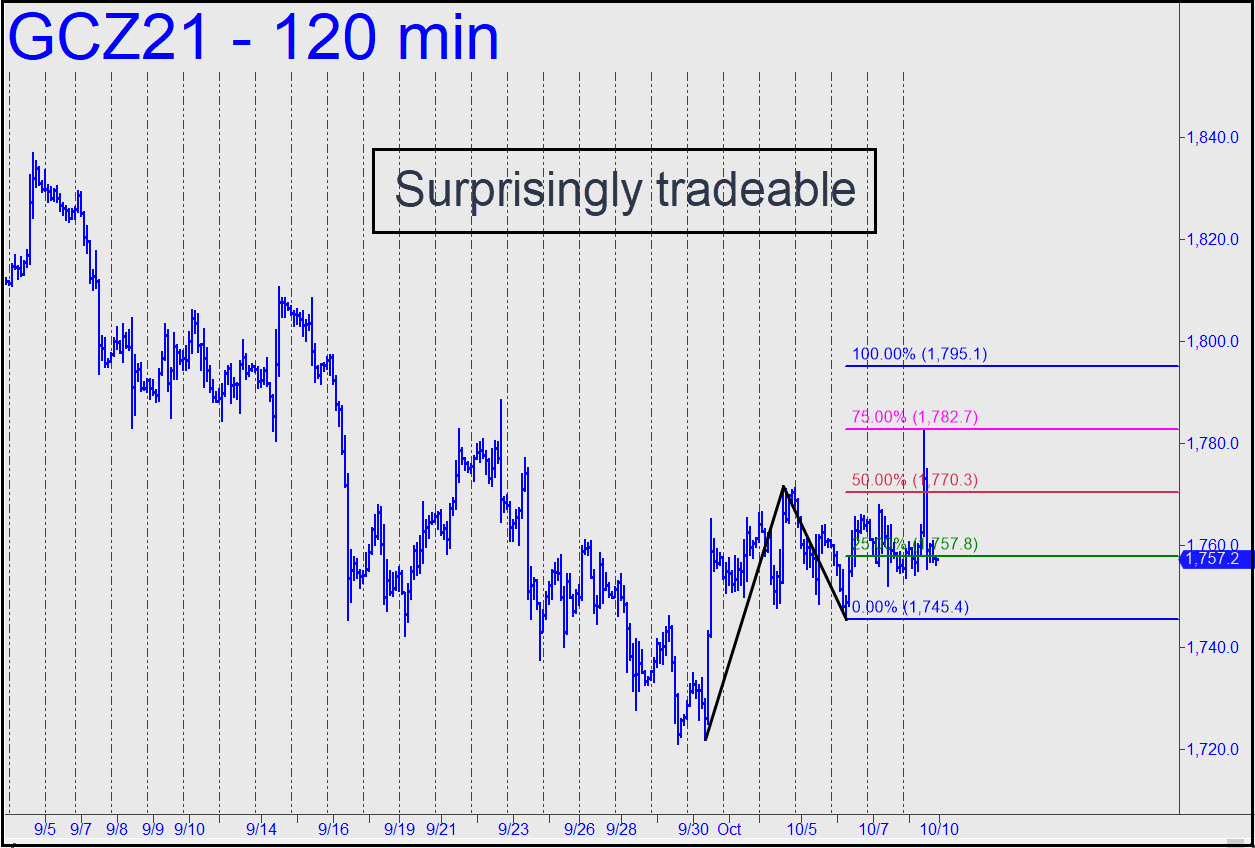 Gold’s pointless histrionics have been surprisingly tradeable, albeit only by Pivoteers who know what they’re doing. Notice how Friday’s stupid spike early in the session reversed from the secondary Hidden Pivot at 1782.70. Any rABC pattern one might have used to set up a short would have worked, although the pullback was so precipitous that executing a stop entry would have been challenging.  Some subscribers may also recognize that ‘Matt’s Curse’  took effect when the reversal occurred precisely at p2. This usually means the retracement will take out the point ‘C’ low of the pattern. We shall see, but if it happens we shouldn’t take it too seriously, since gold has been visiting pain equally on bulls and bears alike for the last several weeks. _______ UPDATE (Oct 13, 4:20 p.m.): And speaking of pointless histrionics, you had to love gold’s $40 lunatic leap today after spasming $20 both ways in the early going. A short a millimeter off the intraday high produced a profit for the subscriber who reported the trade in the chat room, but the pullback made little progress as the hours went on, suggestion that bullion’s ‘DaBoyz’ aim to take this gas-case higher. Here’s a pattern so gnarly that I can all but guarantee that it will work in every possible way, including shorting at 1810.50 via a ‘camouflage’ set-up. That means you could buy a pullback to p=1780.20 ‘mechanically’ with a stop-loss at 1770.10. That’s $4000 of entry risk on four full-size contracts, so minis are recommended unless you are trading with winnings racked up earlier. ______ UPDATE (Oct 15, 7:29 a.m.): When the little p.o.s. plunged overnight to within 70 cents of my 1780.20 bottom-fishing number, I used this rABC pattern to drastically cut the entry risk to $480 on four contracts. The trade just triggered at 1782.10, and I will cover half if it reaches p=1783.3, setting a break-even stop for the rest. _______ UPDATE (Oct 15, 7:58 a.m.): The trade triggered, produced a $480 profit at p, then took it back when gold plunged anew beneath the ‘c’ low of rABC. I was so preoccupied with a few of my WordPress publishing tool’s many egregious dysfunctions at the time that I did not try to re-enter with a second-time’s-the-charm trigger. The futures are in gold-is-garbage mode at the moment, an asset class inferior, even, to bitcoin, but I have little appetite for more bottom-fishing. However, I still expect it to produce a profitable trade from a low somewhere between ‘C’ and the green line, as noted above. I am not recommending the trade unless you know how to ‘camouflage’ your way aboard as I did. The technique usually makes money even if we are wrong, but in this case it produced a scratched trade.