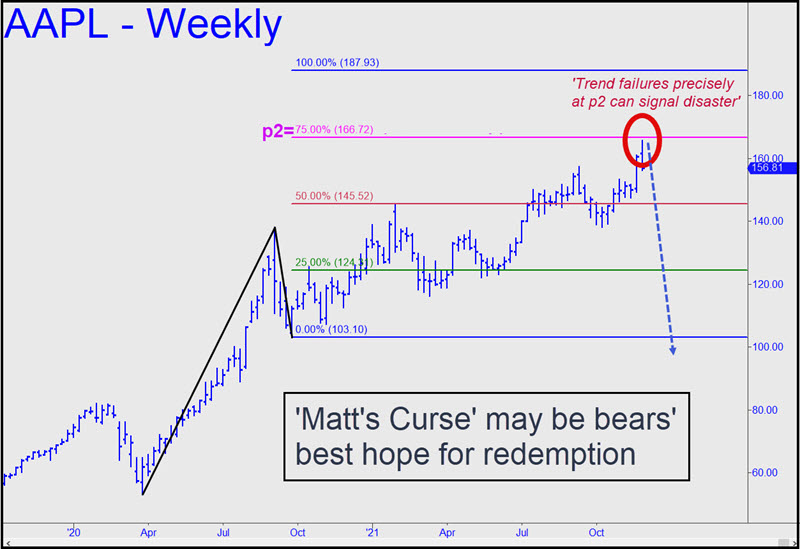 Friday felt like a Pearl Harbor attack on Wall Street. Since when did a Thanksgiving Friday fill investors with dread and fear? The day was supposed to have passed quietly, with second-string prop desks locked on a glide path into what remained of the four-day holiday. Instead, the Dow plunged by 900 points, closing near the low of the day after a couple of failed rally attempts while the ‘value’-weighted Russell index fell by nearly 4%. One might have inferred the markets were finally rebelling against all of the arrant falsehoods that have pumped them full of unnatural vigor, especially over the last year-and-a-half as the global economy has tottered. Everything was topsy-turvy as the week ended: T-bonds were screaming, the FAANGs so beloved of portfolio managers were getting pulped, and bitcoin, the speculative Porfirio Rubirosa  of this era, was immersed in molten hell. A more than $3,000 decline threatened to become the beginning of a crypto bust.

A few of my colleagues had predicted a major top about where it occurred. Peter Eliades got closest with a magic number for the E-Mini S&Ps that caught the high within a point. My own projection missed by 20 points, or less than half a percentage point — close enough for an honorable mention. That was until I had a closer look at AAPL’s chart. The stock got hit hard, down almost 3%, but there is no escaping the fact that if it were to fall a further 5%, to 146, it would become an even better ‘buy’, according to the rules of my Hidden Pivot Trading System. Since AAPL more than any other stocks reflects the zeitgeist of portfolio managers, not to mention their greed, hubris and stupidity, we shouldn’t be too hasty in assuming that Friday’s carnage will mark the beginning of the end of the stock market’s nearly 13-year bull run. But I wouldn’t given up on the idea entirely, since AAPL’s stall occurred in a potentially perilous place. Specifically, the rally failed precisely at the ‘secondary’ pivot of a major rally pattern, as the chart shows. This will subject AAPL to the jeopardy of Matt’s Curse, implying it could fall below $103 instead of rallying to $188 as might be expected in the absence of voodoo technicals. We shall see, but the ‘mechanical buy’ in AAPL will remain valid in any event, as will the bullish implications this would have for the stock market.