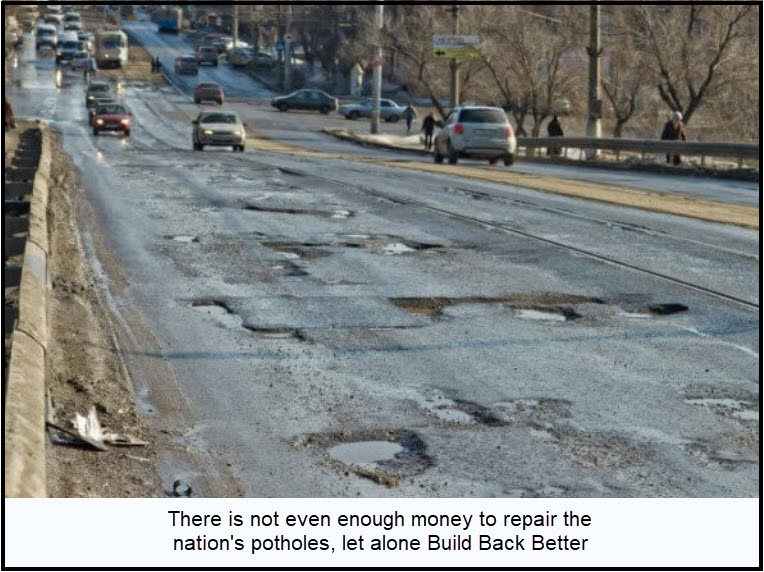 John Doerr, the venture capital zillionaire, thinks America should go all-in on measures to control the weather. Although Doerr fears it may be too late to save Earth and its inhabitants from the ravages of global warming, he says a massive investment program would still be better than doing nothing. His role model is FDR, who put America on war footing with astounding speed after the Japanese bombed Pearl Harbor. The tycoon and those he hobnobs with have so much money that they could be forgiven for being unaware that America is broke. Sure, there’s plenty of ‘wealth’ tied up in stocks, bonds and real estate. But valuations are so pumped with hot air that we might as well write off three-quarters of it, since it will vanish anyway in the next bear market.

Plunging share prices will bring many painful epiphanies, including the realization that every dime of the nearly $30 trillion owed by the U.S. Government– which is to say, owed by taxpayers — will have to be repaid: if not by borrowers, then by lenders. That is the inexorable logic of deflation, and when it comes we will be too busy dealing with the implosion of Social Security, Medicare and Baby Boomer retirement plans to be gung-ho about taming the weather, were this even possible.

Democrats to the Rescue!

By then, Americans won’t feel much like spending tens of trillions of dollars for coal-plant scrubbers, thorium reactors, Wyoming-sized solar arrays and recapturing methane at wellheads. Galloping to the rescue, Democrats will propose a new tax on gasoline to jump-start ‘Build Back Weather’. But the sums required just to get to the first stage of this guaranteed boondoggle would dwarf whatever could be raised with a surcharge of even $10 a gallon, not that anyone would still be driving.

It’s a wonder that anyone, particularly a savvy financier like John Doerr, could believe the capital exists to attempt the rebuilding of America, let alone try to turn Motherf**ker Nature uncharacteristically benign. Tens of trillions of dollars of gaseous savings are tied up in glorified advertising firms like Google and Facebook, in profitless food delivery services, driverless car- and other AI-hubris, and in purveyors of burritos, virtual entertainment and trendy consumer goods. That is what economists mean when they refer to malinvestment: the channeling of savings — in this case vast sums of it — into companies that either sit on it, squander it, or use it to buy back their own shares. Stocks have become grotesquely overvalued as a result, and it is delusional to think any significant portion of the hoarded capital can ever be freed up to rebuild America’s dilapidated cities, highways, bridges, transit systems, railways and airports. The savings are illusory to begin with, and even if every penny could be diverted into infrastructure, it is absurd to think the bumblers, grafters and big-business lackeys on Capitol Hill could incentivize the process so that it would create anything of enduring economic value.