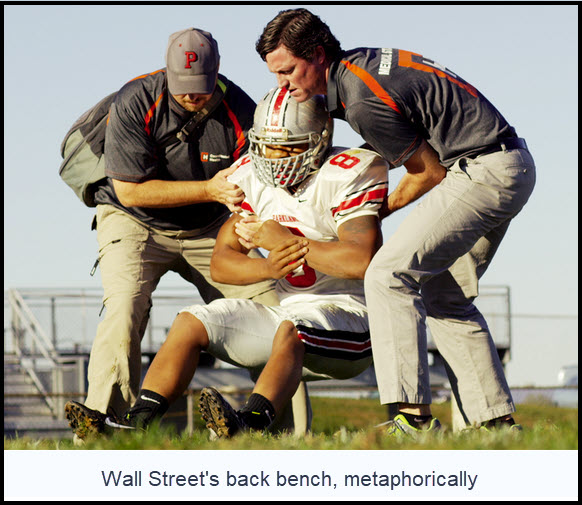 Mr. Market blew a great opportunity on Friday to scare the hell out of everyone, concluding the session with a mild short-squeeze rather than the devastating rout that Wall Street’s years-long wilding spree so urgently needs. The continuing ascent of Apple shares as always remains key to the global illusion of prosperity and the surreal expectations of portfolio managers; and that is why, as last week’s commentary pointed out, the stock is not about to go quietly into the night.  It struggled nonetheless last week to make headway toward a 187.93 target after peaking on Wednesday at a record-high 170.20. AAPL subsequently sold off hard for all of about ten hours, then limped to the finish line to end the week in a way that could have satisfied neither bulls nor bears.

The rally target, a very major one, remains viable, but we’ll need to monitor AAPL’s progress toward it closely, since fears of Omicron, the latest supposed Covid variant, are threatening to strangle the global consumer economy yet again. When the week ended, Fauci and his benighted lackeys in the news media seemed eager, if not to say desperate, for someone to die, or at least be hospitalized for a few days, lest an opportunity be missed to roll out another booster shot and to stoke the public’s antipathy toward the unvaccinated to new extremes. Alas, press releases from health officials in South Africa, Omicron’s apparent ground zero, only served to mitigate concerns that the variant might be the devastating killer that so many politicians and bureaucrats must be hoping for.

Meanwhile, with Western Civilization in mid-stage collapse, the stock market continues to feel like it’s in a sympathetic topping process. However, it takes a little imagination to concoct a scenario in which the practically unlimited quantities of ginned-up money that have powered the bull market for nearly 13 years could dry up. Consider that companies with tens of billions in surplus cash go out and borrow more of it because, apparently, they want to save their ‘real’ stash for…exactly what? Certainly not to expand capacity, despite what you read about shortages. They know that shortages come and go, and that’s why they are reluctant to commit, say, $10 billion to build a fab plant with a years-long lead time just when the global economy seems ready to lock down again.

One logical way the bull market could end involves all of that supposed money on the sidelines. Sideline money is a staple of Wall Street lore, always most plentiful in the intangible form of bullish op-eds whenever bull markets appear to stall. Let the broad averages idle nervously for just a few weeks and some Wall Street Journal columnist will invariably produce 1,200 sunny words about how investors are sitting on untold piles of cash, waiting to deploy it at the first sign of whatever. In fact, precious little money is being sat on in a literal or even figurative sense; for every penny of it is working all of the time, regardless of where it is parked. But like the stock market itself, the money is more a creature of the mind and of mass psychology than of economic reality. Realize that when bull markets climb, it is their earnings multiples that ultimately justify the rise.  At what level do the justifications cease? Well, there really is no specific level, only varying degrees of optimism that tend to foreshadow the stock market’s ups and downs. At extremes, however, the correlation is always inverse, and extreme ebullience can turn into panic literally overnight.

Similarly, the quantity of money available for any and all purposes varies according to the eagerness of people to borrow it. And borrow they must, since, technically speaking, there can be no real savings in an economy that is based 70% on consumption and that, when you play it forward ten years, will be catastrophically unable to meet liabilities for Social Security, Medicare or even a relatively paltry $1.8 trillion of student borrowing. For now, though, investors, if not the working man, are still thinking expansively about our economic future. That is mainly because the stock market is trading at record heights, and because the value of the homes they live in continues skyward.

But let the stock market turn down for no immediately apparent reason, and the gaseous ebullience that allows us to continually expand the supply of money, including sideline money, starts to congeal into something solid and heavy. More selling on Wall Street will quickly turn this substance, which represents the sum of our fears and greed, heavier still. Very early in the shift from giddiness to panic, the desire to borrow money, especially money to prop up falling stocks, will detumesce faster than an octogenarian’s erection. And that is how money velocity could collapse, causing all of those supposed dollars on the sidelines to recede into the shadows of what we’ve feared for so long: a day of reckoning for debtors.