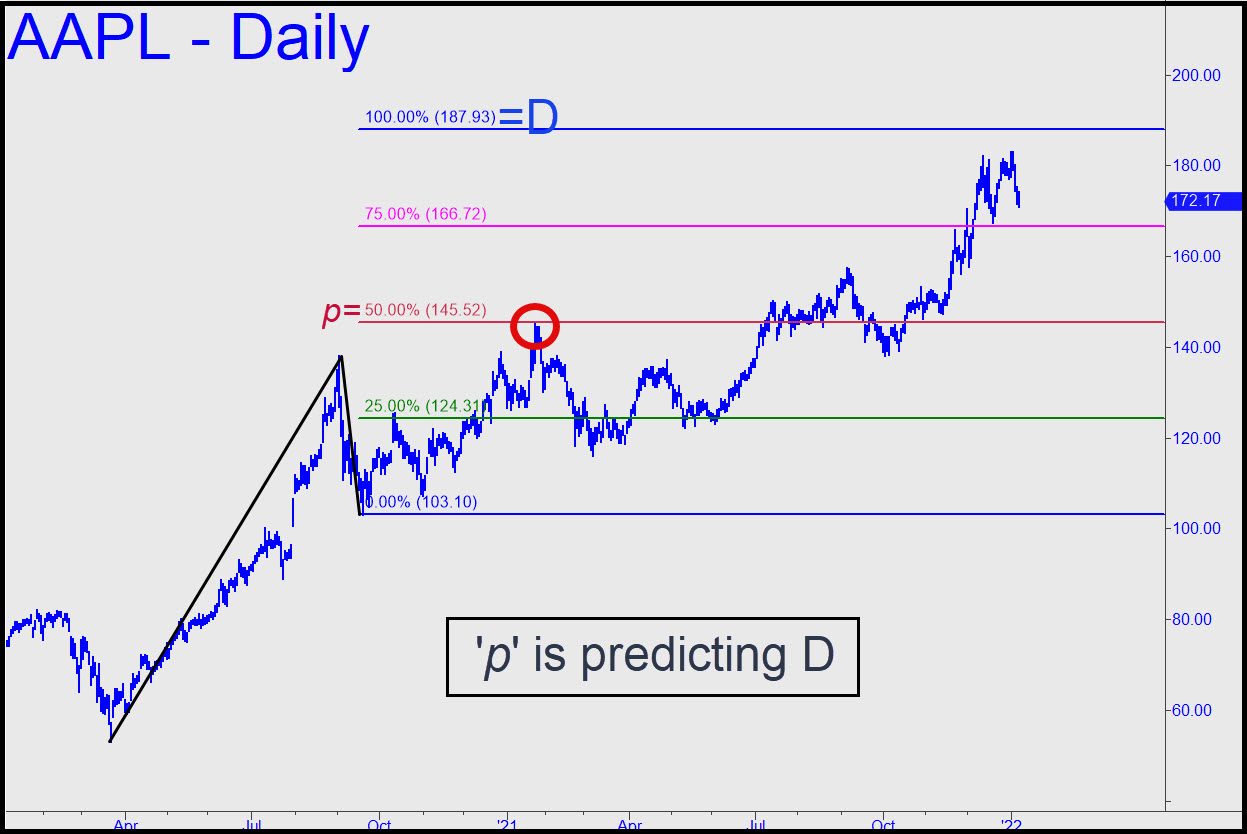 I’ll be interested to see how well our longstanding bull market target at 187.93 works. On the one-hand, I’ve drum-rolled it loud enough and for long enough to compromise its usefulness. On the other, the particular pattern is the most reliable of the ones I employ for trading and forecasting, with a relative quick ABC, followed by a very elongated C-D leg that causes Gartley and other 1-2-3 pattern traders to lose sight of the ‘D’ target. There is also the punitive correction that began a zillionth of an inch from the midpoint pivot. That is usually predictive of an equally precise pullback from the D’ target, which became an odds-on bet to be reached when the stock blasted free of the midpoint pivot’s gravity in November. The least likely scenario I can envision is a bear market starting without D having been reached. We’ll be on our guard for this nonetheless, watching for minor corrective abc patterns to start exceeding their ‘d’ targets, and for minor abc rallies to start failing at ‘p’. _______ UPDATE (Jan 10, 5:20 p.m.): Bears gave it their all but failed to drive AAPL down to p2=167.36, even, let alone to D=167.37.  The short-squeeze that ended the session would trip a ‘mechanical’ short at  x=172.66, stop 175.31, but I’m going to suggest sitting this one out, since the squeeze is unlikely to abate overnight. _______ UPDATE (Jan 12, 5:10): Bulls will face heavy supply between 177 and 181, and I’ll be as interested as you to see how they handle it. If poorly, the expected push to 187.93 may take significantly longer than I’d originally imagined, assuming it happens at all. _______ UPDATE (Jan 13, 6:52 p.m.): I’m no fan of head-and-shoulders patterns because they are everywhere you seek them, but this one is developing too nicely to ignore. If it pans out and AAPL drops below 160, we’ll re-assess the odds of 187.93 being reached to complete the bull market.