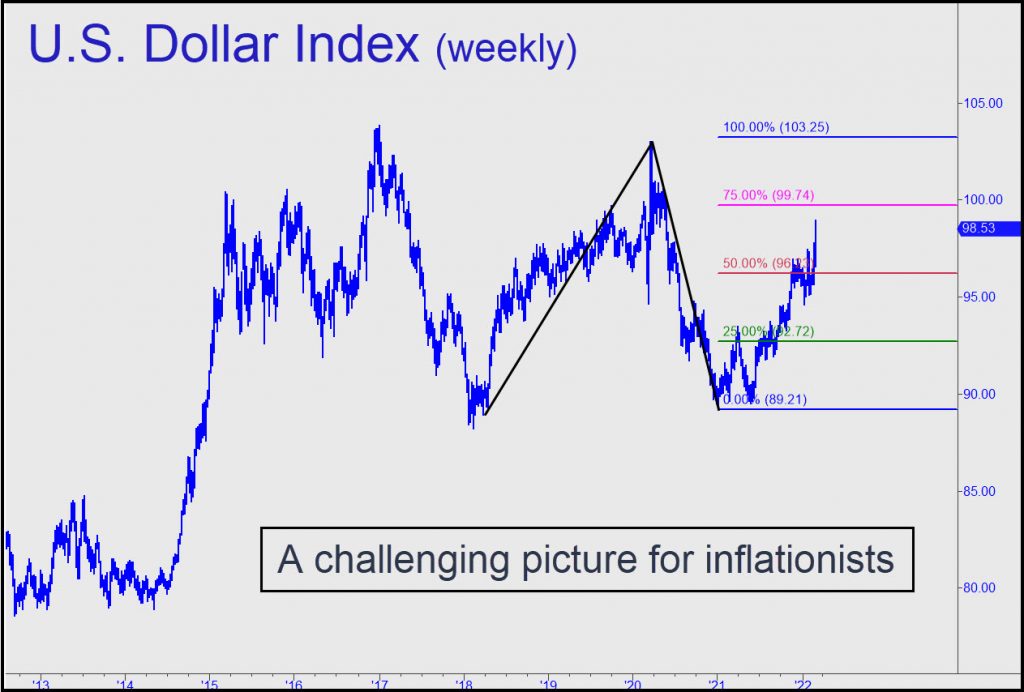 Economists, particularly those who specialize in monetary theory, generally agree that inflation is an increase in the supply of dollars, and deflation a decrease. In practice, however, this theory is far too vague to be of any value for making predictions, since no one has a clue how much money is out there. There are so many fungible forms of it that even call options on Bolivian reverse floaters could probably be substituted for cash in a cleverly structured transaction. Further complicating the calculation of money in the system is that it can expand like heated gas if borrowers are confident that economic growth will remain strong. That is the underlying dynamic of money velocity, and when the level of confidence reaches a manic level of heedlessness, as is the case now, the money supply will expand commensurately.

But what to make of the dollar chart above?  The headlines reflect growing anxiety over inflation, since prices for just about everything are rising, led by crude oil quotes caught in a parabola that has gone out of control. Under the circumstances, shouldn’t the dollar be getting hammered?  There is an easy explanation for this seeming paradox: Although the dollar in plain fact is fundamentally worthless crap, all the other currencies are even worse crap. Further widening the gap is the dollar’s singular usefulness in supporting a global casino with table action in derivatives markets alone exceeding $2 quadrillion. The dollar is the only currency remotely capable of handling such sums, and that’s why it is indispensable. Its relative buoyancy in the global currency toilet would not be much of a concern but for the fact that the vast preponderance of borrowing is denominated in dollars. This means debts will be harder to repay as the dollar continues to rise. It also implies that every nation that uses oil to generate power will find it increasingly unaffordable, since most oil purchases are in dollars. Consumers of crude will face a double whammy, actually, since the price of crude itself has been rising very sharply relative to all currencies and could be on its way to — who knows? — $200 a barrel.

Most economists will tell you that that would be highly inflationary. Indeed, the rise so far accounts statistically for much of the current inflation. However, at some level, perhaps even the current one of around $115, demand will begin to dry up, since consumers more and more will lack the means to pay for endless surcharges in the price of goods and services requiring energy inputs. There is a double-whammy here, too, since energy resources are the collateral backing much of the world’s sovereign debt. Imagine how quickly inflation could turn to deflation when the oil-price blowoff ends, as it must. When that happens, everyone on the lending side of each and every derivatives transaction should just kiss his money good-bye. Unfortunately for us all, this is not just imaginable, it is inevitable, since it will be an unavoidable effect of the coming bear market in U.S stocks.

In those circumstances, the only investable assets that won’t be collapsing will be the dollar and gold. The former will soar not because it is no longer crap, but because urgent demand from borrowers unable to roll loans will put it in a short-squeeze of epic dimensions. The eventual result will be a deflation that even the most doctrinaire monetarists will recognize and understand, since its chief symptom, a crushing increase in the real burden of debt, will be felt by anyone who owes dollars.

Enjoy inflation while it lasts, since what’s coming next will not be something to which we can simply resign ourselves with a shrug, like higher prices for gas, groceries and all the rest. Deflation will impose hardships far more difficult to avoid than merely curtailing spending on certain items. It will be bankruptcy writ large, a rebuke to excesses that have been accumulating in the financial system for more than 30 years.