The Wizards Cannot Hold Down the Dollar 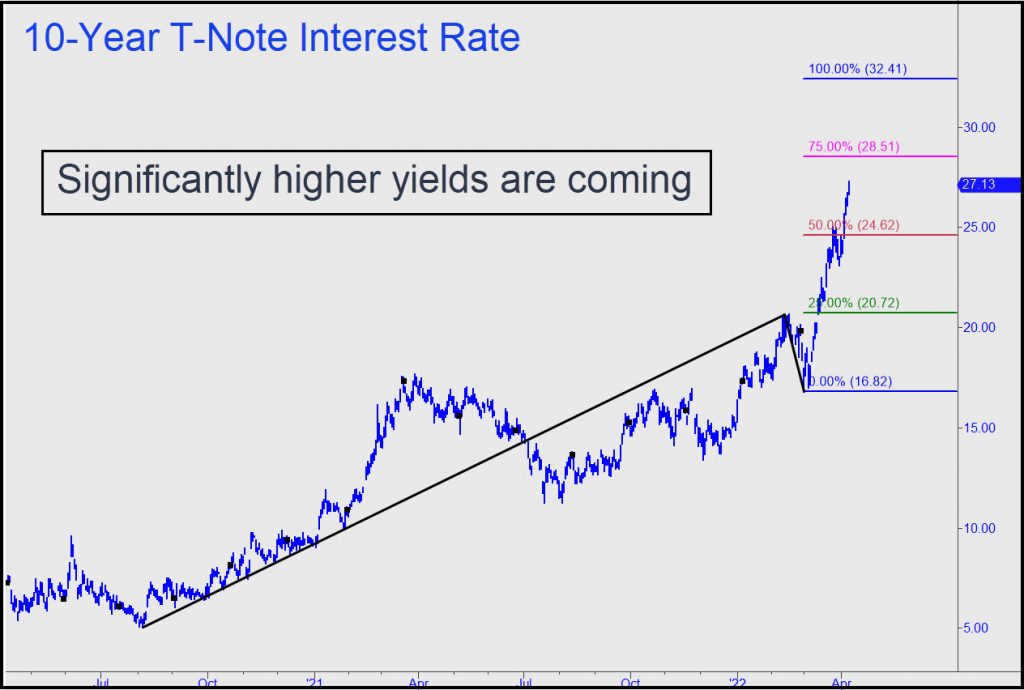 For more than a year, I’ve recommended what my friend Doug Behnfield calls the ‘barbell strategy’ to secure one’s nest egg against the deflationary hard times that lie ahead.  As formulated by Doug, a wealth-management advisor based in Boulder, the barbell portfolio is constructed with gold and bonds as offsets. Try to imagine the worst of times and you may have difficulty concocting a scenario in which T-Bonds and munis on one hand, and gold on the other, would fall together. However, it is relatively easy to imagine circumstances in which either or even both sides of the hedge would rise in times of extreme economic adversity.

I had suggested holding off on the T-Bond portion of the hedge until interest rates peak. That day is coming, probably sooner than most ‘experts’ think, but we are not quite there yet. Yields on the Ten-Year Note ended last week at 2.71%, but my forecast calls for a top, or at least a lengthy leveling off, at exactly 3.24%. This is somewhat higher than the 3.02% rate I’d projected  for the 30-Year T-Bond, the difference lying in the way their respective rallies have unfolded. For purposes of optimizing the barbell hedge, however, I’d suggest using the 3.24% rate indicated in the chart above.

A top at that level would be a far cry from the 20% peak in June 1981 that followed two years of tightening by Paul Volcker. As a result, inflation remained subdued for more than 30 years. The effects of tightening this time around could not conceivably turn out to be as benign as before because the debt sums affected are exponentially larger. To cite one particularly menacing example, Third World debts amounted to perhaps $1.5 trillion in the mid-1980s. This sum was deemed sufficient to topple the global banking system if something were not done about it. In the end, nothing was done about it. The debts were simply papered over, providing a fresh foundation for untold heights of indebtedness that currently total more than $2 quadrillion. That number includes the notional value of the world’s chief instrumentality for borrowing — i.e., a financial-derivatives market that has supplanted trade in actual goods and services as the planet’s main line of business.

If you’re worried that Powell & Co. will keep raising rates higher and higher until inflation has been ‘tamed,’ the good news is that these charlatans will never get the chance. The bad news is that a bear market in stocks will intervene well before then, not only quelling inflation, but setting in motion a deflationary implosion that will cause even 2%-3% rates to asphyxiate all who have borrowed in dollars. The list implicitly includes virtually everyone on the short-dollar side of the derivatives market.

The rise in oil prices is a warm-up for this catastrophe, since the world is having to pay for energy with increasingly valuable dollars. The wizards who have effortlessly inflated asset values across- the-board over the last two decades are about to discover they are powerless to contain a deflation that will ultimately feed off a strengthening dollar and a corresponding increase in the real burden of debt. The size of the dollar market dwarfs even bonds, repos and swaps put together, a Frankenstein monster energized by lighting bolts that policy tinkering cannot divert.