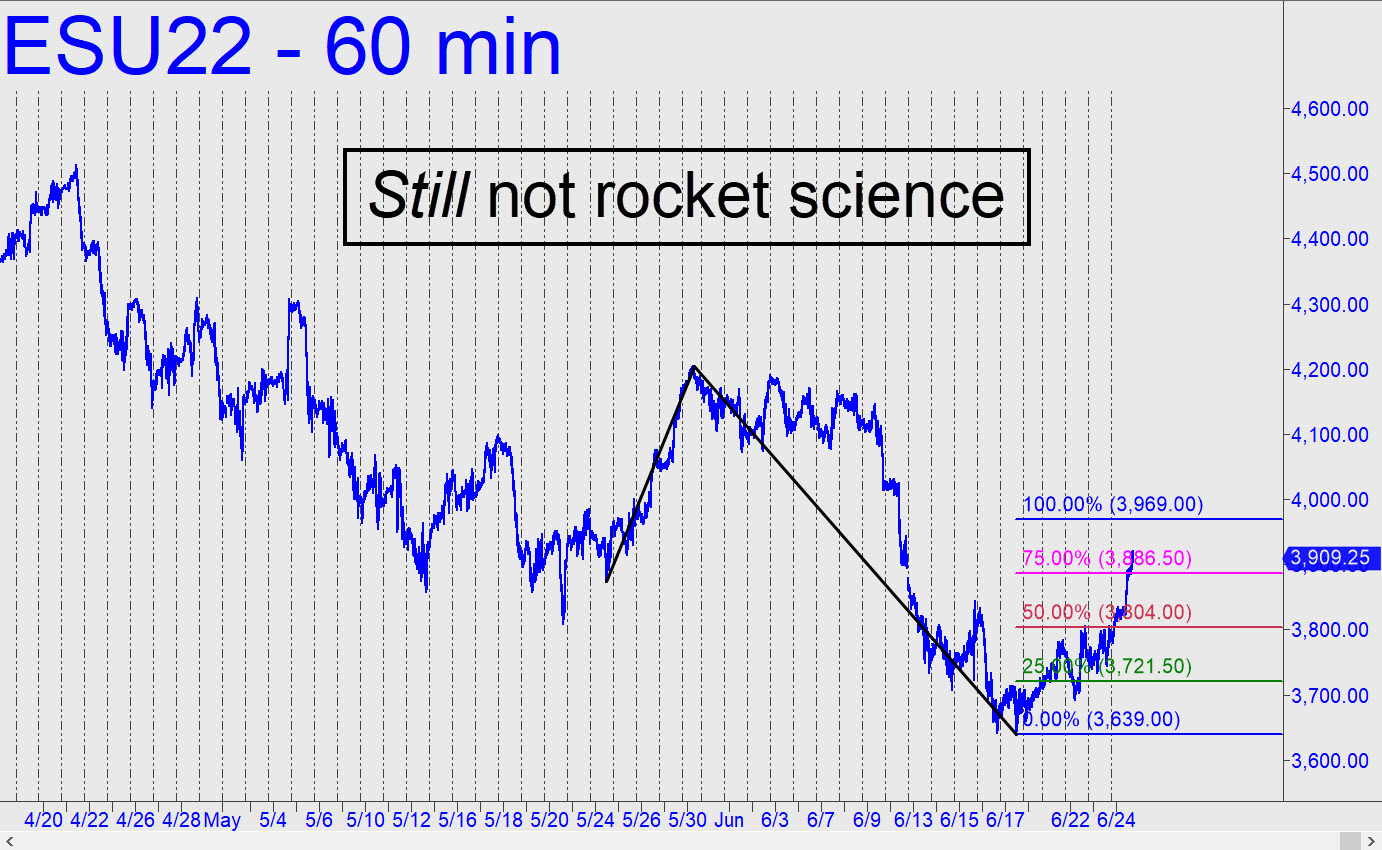 The bullish ‘reverse’ pattern aired here last week served us well, taking the guesswork out of a rally that even at its nastiest was an easy read. The 3969 target can be used this week as a minimum upside objective, but also as a place to get short with the usual risk-squashing tricks if you’ve made some money on the way up.  Short-covering took a while to push the futures past the 3804 midpoint pivot, but once they broke above it Thursday night, the move became sufficiently decisive to turn 3969 into an odds-on bet. _______ UPDATE (June 28, 6:04 p.m.): Even though I’d drum-rolled expectations of a weak bounce, the one we got was even feebler than I might have imagined, falling fully 16 points shy of the 3966 minimum target given in the weekly commentary.  This is despite the fact that DaScuzzballs engineered a head-fake on the opening bar that exceeded the previous day’s 3948 peak by a hair. The failed short-squeeze trapped bulls in a way that is not going to sit well with them on Wednesday, so don’t expect a miraculous recovery. There is also a mountain of bad news weighing on the stock market at the moment, and the difficulty DaBoyz are having stampeding shorts implies another big leg down rather than a big bear rally.  _______ UPDATE (Jim 29, 9:16 a.m.): A chat-room denizen posted sentiment figures that put bearishness at its second-highest level in 35 years. I joked that perhaps this time bears have finally gotten it right, but that is most unlikely. In aactuality, it’s hard to imagine a sentiment reading so extreme NOT producing a powerful short-squeeze rally. It’s coming, so we will need to monitor the lesser charts closely to get the timing right. I’ll suggest starting with this chart, adjusting the ‘C’ low downward if necessary.  A run-up that touches the green line should pique our curiosity; through the red line, our earnest attention. If you want to speculate on this camo-style with risk tightly controlled, the 5-minute chart went impulsive exactly an hour ago.______ UPDATE (Jun 30, 6:06 p.m.): Bulls worked hard to come away with just a small edge at the close on Thursday, but don’t expect them to do much with it ahead of the July 4th holiday weekend. If stocks fall unexpectedly hard, this brick will be headed for 3685.75.  (30-min, A= 3950.00 on 6/28; B=3801.25 on 6/29 at 1o:00 a.m.; and C=3834.50)