How Inflation Has Begun Mutating into Deflation 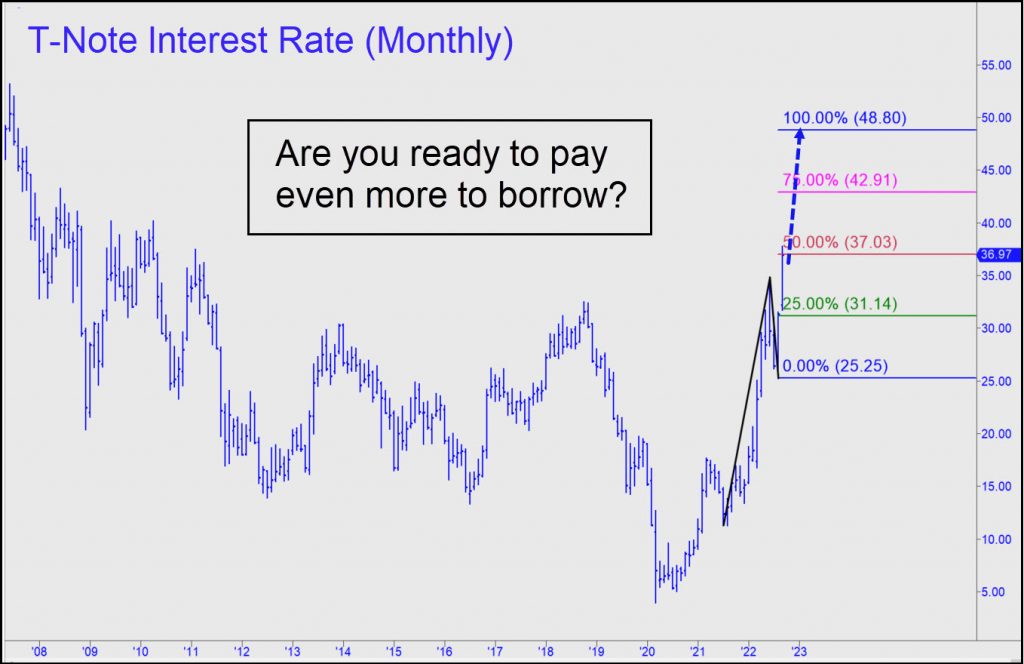 Yields on 10-Year Treasury Notes, currently at 3.70%, are likely to hit 4.90% before they level off. It is hard to imagine an increase of such magnitude not disrupting the U.S. and global economies severely. America is already in a recession that looks all but certain to deepen before we hit bottom in a year or two. And yet the Fed keeps tightening, leaving little doubt with last week’s 75-basis-point rate hike, the third in four months, that Powell & Co. are hell-bent on crushing consumer inflation that has been rampaging for two years. The Open Market Committee must have known that our teetering economy, a super-heated real estate sector and a vaporous stock market would implode if they merely talked about raising rates. However, for the first time since Volcker’s 1980s heyday, the central bank has actually walked the walk, surprising everyone by pushing up administered rates a total of 275 basis points since last May. This has sent borrowing costs soaring, including mortgage rates that have more than doubled from the sub-3% levels that obtained toward the end of 2021.

Under the circumstances, it is surreal for politicians to be splitting hairs over whether the U.S. is in a recession. Only in comparison to the disaster that is coming could the current economy be described, as Biden is wont to do, as holding its own. The stock market has come down hard, so far without the kind of climactic selling we might expect at a bottom. This has taken a little of the steam out of inflation, albeit mainly via falling gasoline prices that reflect a global economy in a state of imminent collapse. But the broadly falling asset prices that lie just ahead eventually will trigger waves of bankruptcies so destructive and relentless that we’ll wish we were dealing merely with rising consumer prices. All that requires is merely avoiding buying certain things or buying cheaper substitutes. Debt deflation is not so easily managed, for one does not so much deal with it as struggle to survive it financially. Tens of millions of mortgaged homes will be underwater, private savings will be wiped out, most pension funds will go belly-up, and the accounting fiction that has made Medicare and Social Security appear solvent will be laid bare as benefits are reduced to subsistence levels.

Amidst obsessive chatter and headlines concerning inflation, its opposite is already taking shape. Consumer are at a tipping point, holding off on home and car purchases because they think prices will be lower in the future. Prices for both have softened just a little, but the wholesale markdowns that are coming will shrink the economy so precipitously that consumers will be in no shape to hunt for bargains. That’s because their net worth will be falling even faster than prices. The collapse of home prices at the high end will be especially brutal, since the adjustment will take place all at once rather than gradually. Currently, buyers and sellers are at a standoff. The latter, with no mortgages and no urgent need to sell, are holding prices at or near peak levels. For their part, buyers are waiting for prices to come down. They are certain to be right, but in the meantime, transaction volume has dried up almost completely, and with it the vital mechanism of price discovery. In the very hard times ahead, there will be no buyers for these homes, and they will be bequeathed to a next generation that cannot afford them. Thus will today’s inflation shift into reverse, leaving the economy in a state of severe deflation and inured to stimulus just as it was in the 1930s.