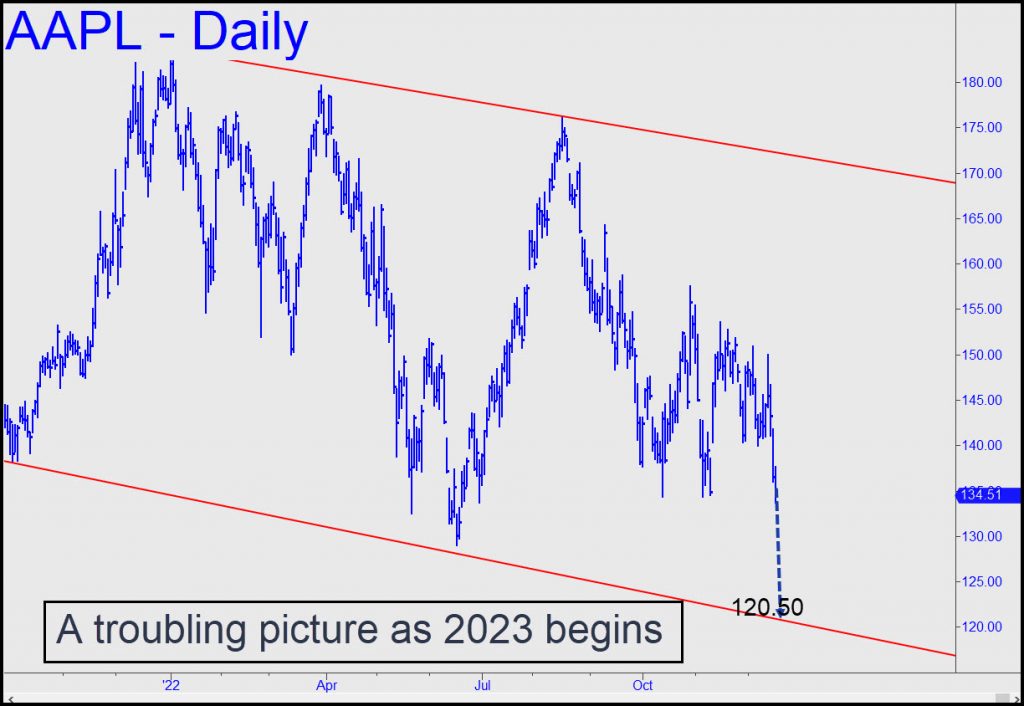 The modest bear market rally begun in October likely ended last week when stocks turned sharply lower after failing to achieve clear ‘Hidden Pivot’ rally targets. Now, if the selling should continue to exceed minor abcd targets as occurred last week, that would affirm that Papa Bear is back. AAPL in particular, the world’s most valuable stock, took a dive that has another 10% to go before good support is likely to materialize near $120 (see chart, above).

The smart money that manipulates AAPL was finding it increasingly difficulty to distribute stocks to widows, pensioners and rubes. Making the shares affordable to the masses was their intention when they split the stock 4:1 in August 2020. AAPL was trading for around $600 at the time, priced well beyond the reach of most individual investors.

How the Game Works

The split allowed AAPL’s canny institutional sponsors to rig the stock’s price action so that AAPL could forge steeply higher without requiring large infusions of cash. This simple trick was always performed in the dead of night, when volume typically dries up. The smart guys would pull their bids, letting AAPL fall for no apparent reason. With sellers exhausted ahead of the opening bell, it was easy for the thimble-riggers to trigger off a short squeeze, gapping the stock well above the level where overnight selling had begun. It was even easier to create bullish gaps when AAPL wafted higher overnight on thin volume, since the day began with shorts already spooked out of their wits and hemorrhaging losses. Covering their positions was costly because DaBoyz backed off their offers, causing the stock to soar on light volume.

Very little stock changes hands in these gaps. AAPL could be trading for, say, 147 on the close, and then open the next morning at 152. With a peak valuation exceeding $2 trillion, a $5 leap in the stock would add tens of billions of spendable dollars to the economy in mere seconds. This has proven to be a far more efficient way to stimulate consumption and stock speculation than old-fangled, clumsy Fed stimulus. Bullish gaps effectively create free money.

Thus did the portfolio managers who control AAPL manipulate it higher for nearly 15 months after the split. It peaked last January at $183, or around $730 unadjusted. Since then, over the last 300 or so trading days, the ass bandits performed their little trick perhaps 100 times. It almost never failed, even though the rubes eventually could see that AAPL was always a buy on artificially induced, overnight dumps.

Unfortunately for the smart guys, the trick has stopped working. That’s because iPhone is facing a deep global recession that will flatten sales as never before. This has made it much harder to sell a bullish story on Apple Inc., even to the rubes, and to panic shorts . The handwriting was on the wall when the company announced in June that sales appeared to be holding up fairly well despite signs that the U.S. economy was slipping into recession. The announcement gave DaBoyz the cover they needed to achieve a final, sleazy distribution before pulling the plug in August.

As AAPL goes, so go the markets. That means the bear rally begun in October is over. Both will bounce when the stock hits 121, but my long-term forecast for AAPL calls for a bear market bottom below $50 a share.  Because AAPL is the most important stock market bellwether that ever was, we shouldn’t expect the broad averages to fare much better.