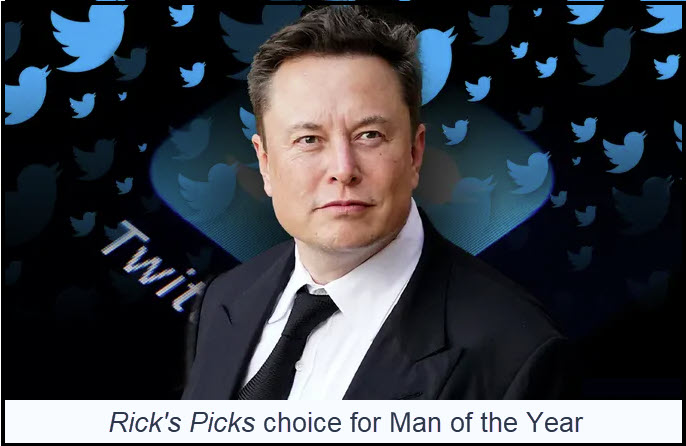 Last week’s commentary went full contrarian with the seemingly nutty idea that 2023 could be a dull year for investors despite the looming possibility of a global economic collapse. Inflation, deep recession, war, disease and political unrest are just a few of the factors that could bring a badly limping financial system down. But suppose the global picture were to brighten significantly? Consider the possibilities: a senile U.S. president is forced to step down; Putin negotiates an end to a war in Ukraine that has become unwinnable; the nascent rebellion in China is joined by sympathetic soldiers; anti-communism rises up around the world, even in the U.S.; free speech returns on a global swell of popularity; and the content of Hunter Biden’s laptop gets fully exposed, rousing Americans to root out corruption at the FBI, State and Justice departments.

Rebellion against the globalists and communists is stirring everywhere. All hell could break loose, but a positive outcome is hardly inconceivable. Farmers in Canada, Netherlands and elsewhere could prevail over climate-change zealots who would prefer that everyone eat tofu. Brazilians could stymie the fraudulently elected Lula da Silva from opening Latin America’s back door to his Chinese comrades; Italy’s new premier, Giorgia Meloni, could bring down the EU by demonstrating that supposedly ‘far-right’ leaders are actually just mainstream champions of a common-sense path back to economic health. There are also mounting protests against Iran’s Islamist dictatorship that could strengthen and spread to the Muslim world. They surfaced last week when Iranian soccer players declined to sing the national anthem at their opening World Cup game against England.

The Laptop That Keeps Giving

Regarding the world’s most infamous laptop, no longer can its incriminating contents be suppressed online or by the partisan hacks who run the New York Times, Washington Post, L.A. Times et al. The facts are by now too familiar and too well-corroborated to sweep under the rug. Hunter Biden’s depredations reveal not only that “the Big Guy” benefited financially from his son’s influence-peddling in China, Russia and elsewhere, but that Dad sold out America to a Chinese enemy dedicated to destroying us and implementing a heinous “social credit” system to rule the world.

Covid censorship has arguably had even bigger implications so far, since countless deaths have occurred that are directly attributable to misinformation spread by Fauci and other jab-happy officials who benefited financially, politically, or both. With scientists and doctors now free to speak their minds about the shocking dangers and ineffectiveness of Covid supposed vaccines, Big Pharma and their most zealous political supporters could eventually face a torch mob as hundreds of thousands, or even millions of people who were ‘vaccinated’ become sick or die from strange, unfamiliar causes.

All of this suggests 2023 is not likely to be dull, even if the effect on securities markets is unpredictable. Whatever happens, Elon Musk will surely have a role to play, since he has been using Twitter since acquiring the company to powerfully boost free speech in the U.S. and around the world. Most recently, he came down hard on Tim Cook, the weaselly hypocrite who runs Apple, for helping China suppress protests by crippling AirDrop. The app allows iPhone users to communicate via local networks without fear of being monitored by the government. Musk also has blown the lid off Twitter’s brazenly political censorship, releasing emails that show the firm’s employees to have done the bidding of Biden and other powerful Democrats, barring political opponents from using the platform. One of them was actor James Woods, who loves to spar with leftists and has vowed to come back at Twitter with a lawsuit that could ultimately embolden other Hollywood conservatives to come out of the closet. Perhaps when the clock strikes midnight on December 31, we’ll have things to look forward to after all.