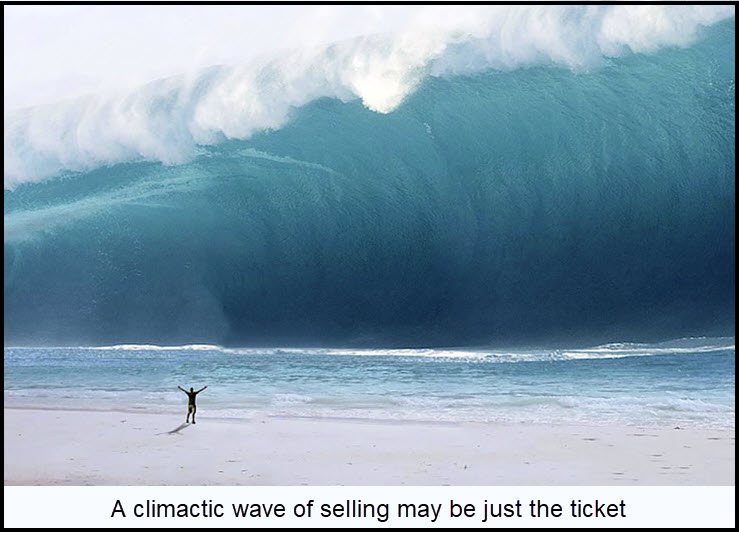 Be skeptical if stocks start the new year on a positive note, since that would be the perfect way for Mr Market to set the hook to trap bulls and bears alike. It would probably take most of the opening session on Tuesday for an enticing rally to build up steam, since the bears who would be doing most of the buying via short-covering will need some painful prodding before they hit the panic button. Mr Market has had an especially hard time trying to stampede them lately, since he holds such lousy cards. Recession is upon us, tightening its grip as the shares of such former world-beaters as Apple, Tesla, Google, Facebook and Amazon have collapsed. This has caused the “wealth effect” to deflate precipitously, unnerving investors who understand that the carnage will end only when a tsunami of exhaustion selling lays waste to the most resilient bulls.

My best-case scenario comes from AAPL’s chart, which looks ugly but not bottomless. In fact, the stock need only fall a further $8 or so, to around $121, to find good support at a trendline I’ve been drum-rolling for months. “Get Apple right and you get the stock market right” has been Rick’s Picks‘ mantra for nearly two years, and it has served us well. Because the stock provided a decade-long free ride for portfolio managers and has hooked them like dope, it will always tell us exactly what’s on their minds. Now, despite grim headlines and dark clouds of war and recession hanging over 2023, Apple’s chart says the stock market’s decline may have just a little further to go before either stabilizing or rebounding. Some of my guru colleagues appear to expect strongly otherwise and have been predicting a January disaster. But don’t be surprised if stocks continue to muddle along, inured to a darkening reality, after AAPL completes the dive to 121 predicted here since the stock was trading more than 40 points higher.