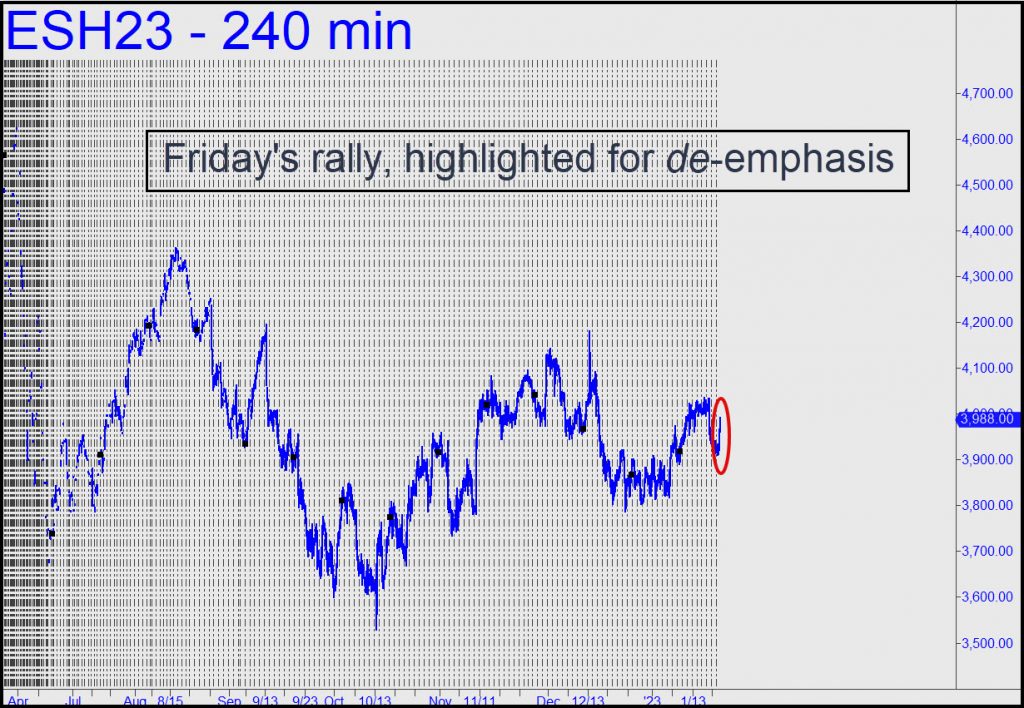 The chart is meant to put Friday’s giddy short-squeeze in perspective. If you are a bull and feeling a little discouraged by what you see, that is what I had intended. What better time to rack bears than in the final hours of a week that was more comic relief than hard news? Biden’s docugate was outed entertainingly by Tucker Carlson as a not particularly sinister plot by ‘Permanent Washington’ to make certain that the thieving, senile old coot doesn’t run again. It also has the beauty of allowing many Democrats and even a few Republicans to evade discussion of far more serious crimes that would implicate them all in shadier misdeeds than misplacing classified documents. In this temporary climate of political unseriousness, the S&P 500 was aggressively stoked to Mau-Mau bears, lest they become cocksure about the extremely dim prospect of new all-time highs with recession-or-worse stalking the U.S. and global economies.

Incredibly, the eggheads, including a few Nobelists, remain in denial that a U.S. recession has even begun. The stock market is not so stupid and may even have begun to recognize that lower inflation could be leading to an economically fatal debt deflation.  How else to explain the headless-chicken feints in both directions on news that prices for some things are coming down, if much more slowly than they rose?  Like the keister bandits who control bitcoin’s price, the svengalis of Battle Creek have seized on markets numbed by chaos to jack cereal prices six ways from Sunday. For instance, the 16-ounce box of Cheerios that once sold for $4.70 is now a 14-ounce box for $6.99. If you think the trend has gone far enough, be careful what you wish for, since, in the unimaginably hard times that may lie ahead, we could get free cereal dispensed one cup at a time from trucks operated by the Federal Government. [Big job cuts in Silicon Valley and elsewhere suggest the U.S. recession will continue to deepen, presumably until even Biden and some widely quoted eggheads admit we’re in one. Click here for my latest interview on this topic with Howe Street’s Jim Goddard. RA]