As California Goes, So Goes the Nation?

As California goes, so goes the nation? We had better hope not, since the state’s economy is imploding so swiftly that it threatens to take cities and towns from Eureka to San Diego down with it. Consider the plight of El Monte, a city of 125,000 in Los Angeles County that recently cut expenditures to the bone in order to close a $9.5 million budget gap for the fiscal year begun in July.  Working frantically against an inflexible deadline, local officials furloughed most of the city’s 375 workers, laid off 17 police officers and closed down an aquatic center for all but four months of the year. Then they got the bad news: Sacramento will not be sending them $2 million in gasoline taxes they were counting on. And that’s not all:  The state will be taking even more revenues from El Monte, but the city won’t know how much until the legislators get their own house in order. “It’s devastating,” city manager Jim Mussenden told a reporter for the Wall Street Journal. “We’ve already worked very hard to reduce our budget, and now we will have to look at more cuts.” 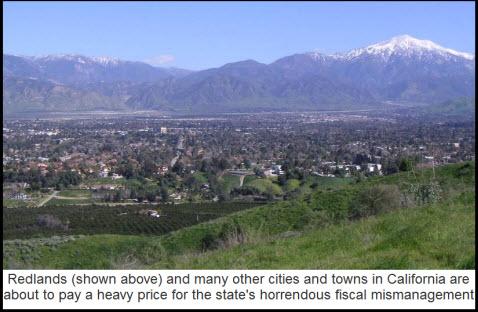 Redlands, also in Southern California, is taking similarly dire measures to balance its $50 million budget. After cutting $5 million of outlays through June, the city of 70,000 is looking to save another $5 million by opening libraries just two or three days a week, closing some senior centers, asking volunteers to maintain parks, and furloughing employees for ten days. In addition, Redlands is going to leave 15 positions unfilled on the city’s 83-officer police force. “This could really push us over the edge,” a city spokesman told the Journal.

Big cities are getting hit just as hard. Los Angeles officials said they expect to lose about 2,300 construction jobs because the Community Redevelopment Agency will not receive $72 million that had been anticipated. The agency has a $688 million budget, according to the Journal, but most of it reportedly is earmarked for debt service on projects already under way.  Things are just as bad in Northern California, where, for instance, Solano County has cut $100 million from its $1 billion budget, in part by laying off 200 employees. Now the county is looking to lay off another 10% of its 3,000 workers in anticipation of rapacious state raids on its funding. “The problems caused by the state’s mismanagement are now being handed down to cities and counties, which is just wrong,” a Solano County supervisor told the Journal.

Ranked as a country, California would boast the sixth largest economy in the world.  Should we be worried, then, about a ripple effect across the U.S.?  Not according to Steve Levy, director of the Center for Continuing Study of the California Economy. “It’s a $26 billion issue in a $12 trillion [U.S.] economy,” he said.  We think Levy will be wrong on both counts, since California’s problems are metastasizing even as the U.S. economy continues to shrink. Like policymakers in Washington, D.C., officials in Sacramento are counting on a resurgence in growth to balance the budget. But in both cases, taxes are slated to rise to levels that will all but asphyxiate any recovery that could conceivably cause revenues to uptick.

Moreover, neither Sacramento nor Congress has faced its fiscal problems squarely. At the national level, a massive bailout effort has produced windfall profits for a few big banks but no measurable pick-up in economic activity.  And in California, desperate attempts to balance a budget $26 billion out of whack have merely postponed disaster. In fact, much of the balancing has been done on a fulcrum of lies. Paychecks totaling $1.2 billion have been deferred into the new fiscal year, and $1.7 of income-tax withholding has been accelerated. These shenanigans all but guarantee that California will be mucking in deficits for years to come. Under the circumstances, any federal stimulus money that comes the state’s way is going to have about as much effect as food stamps raining down on a blighted neighborhood.