On Foundation of Lies, Recovery Is Impossible

Gold continues to hang tough in the midst of oil’s nasty selloff. Although August crude has fallen more than 14%, from last Tuesday’s peak of $73.38, a Comex Gold futures contract expiring the same month lost just 2.5% of its value during the same period, falling from $947 to $924. The fact that gold has not plummeted in sympathy with oil strongly hints that it will be quite feisty when selling in the oil pits finally lets up. It was triggered by fears that the alleged global economic recovery is much weaker than had been thought. One might have expected investors to be prepared for this turn of events, but apparently not. The selling of oil began in earnest in connection with an uptick in job losses reported last week by the Department of Labor, and a 0.1 increase in the U.S. unemployment rate. But it has snowballed since, lending weight to the notion that investors really were surprised by signs of renewed weakness in the U.S. economy. 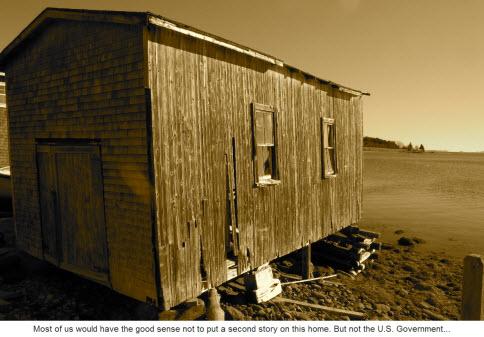 The jobs data could not have surprised anyone who has shared anecdotes about the economy with friends, neighbors or colleagues. However, it would seem that the government’s statisticians and spinmeisters are in a warp that rules out such evidence. But then, why would they even want to consider the big picture if it undermines the government’s aggressive efforts to convince us that the economy is bouncing back?  This is evidently what we are suppose to infer, based on data as ephemeral as a weekly report on California home prices. Granted, they are not falling as steeply as before; but California is itself in a state of financial and economic collapse, and that should more than suffice to quell all of the inane happy-talk.

Just Look Around You

Unfortunately, we can see no end to the nation’s economic miseries. To the contrary, the lies that we are being asked to believe about a recovery that exists only faintly in statistics can only impair the economy’s ability to right itself. Whatever the statistics, and however the Obama Administration tries to spin them, nearly all Americans recognize how grave our problems are. They have seen their retirement dreams go up in smoke, and they know that they won’t be able to borrow against home equity to put their kids through college.

They also understand that the middle class faces huge tax increases to pay for President Obama’s grandiose plans, and they know that healthcare costs are spiraling beyond the threshold of affordability – not only for individuals and employers, but for a U.S. Government that has the brazen nerve to tell us healthcare will somehow cost less when the government takes it over completely.

Until we get past all of these lies there can be no hope whatsoever for an economic resurgence.

Beginning tomorrow, Rick’s Picks expands its coverage of the gold world with weekly contributions from Chuck Cohen, a seasoned investor and consultant who knows the mining world as well as anyone we know. In his initial offering, a three-part series, Chuck will explain why he thinks gold is about to embark on the most spectacular bull market of them all. He will also try to shed some light on why most investors fail in their objectives, and why they are oblivious to gold’s volcanic potential on the eve of its eruption. In future columns, Chuck will get down to details, picking the junior mining stocks he believes will offer the most powerful leverage once the bull market shifts into high gear. To ensure that you don’t miss out on Chuck’s debut tomorrow, and to have Rick’s Picks commentary delivered free each day to your e-mail box, click here.