Is Decline of U.S. Manufacturing Exaggerated?

We usually think of America as a has-been in manufacturing, so the graph below may come as a surprise to some readers. It was sent to us by our friend Brad, who likes to play devil’s advocate whenever we go over-the-top with some outlandishly bearish prediction about the economy.  The graph itself accompanied a recent article in National Affairs, “Keeping America’s Edge,” by Jim Manzi.  America’s apparent decline in manufacturing is a claim that has been repeated so often that few would think to challenge it. The U.S. used to make real “stuff,” according to this argument, but now it no longer does. What this graph shows, according to comments at Manzi’s blog,  “is that this claim is at best exaggerated, and almost certainly wrong.” 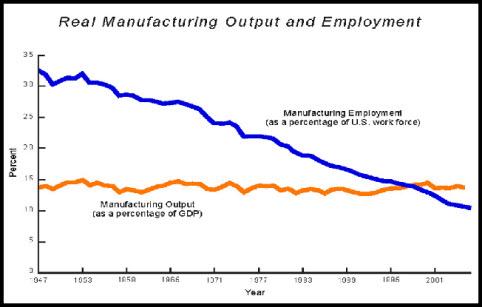 “Unfortunately, fears about America’s decline in manufacturing have unnecessarily complicated discussions about China’s rise in the US, and created more worry then is merited.  China’s growth is not hollowing out U.S. manufacturing.  There are certainly problems with imbalances that need to be addressed, but they need to be addressed rationally with a clear understanding of the difficult issues each country faces within the relationship.”

Our initial reaction was disbelief. How, we wanted to know, do these figures account for offshore manufacturing by U.S. companies, and what is their impact on personal income?  Surely the huge sums earned by service-industry financiers dwarf the earnings of manufacturing-sector employees?  And, do these statistics recognize the fact that the only successful car manufacturers in America are foreign-owned?

Readers, we invite your comments.  Does the U.S. have a future in manufacturing that we erroneously wrote off long ago?  And will our prospects be limited by a lack of good jobs for manufacturing workers who have been replaced by machines?