We’re running the commentary below for a second consecutive day because it drew such a heavy and varied response in the Rick’s Picks forum.  Surprisingly, no one rose to Milton Friedman’s defense, although one reader traced the current state of the Dismal Science, such as it is, to economist Irving Fisher, who achieved notoriety for declaiming very publically just before the 1929 Crash that “stock prices have reached what looks like a permanently high plateau.” The professor subsequently went back to the drawing board for some serious reflection on deflation, so it’s possible he’ll return to vogue at some point, or at least have his probably undeserved reputation as a laughing stock mitigated by sure-to-be-growing legions of anti-Keynesians. 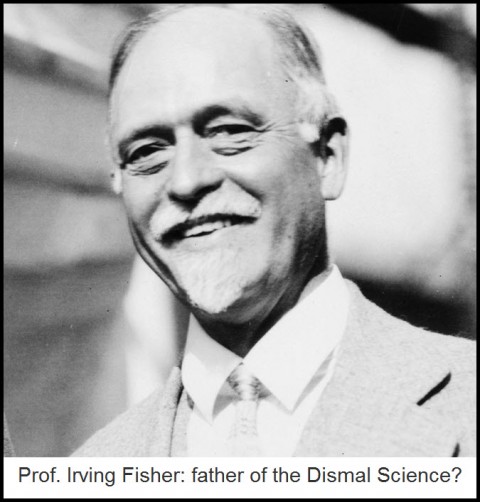 Tomorrow we’ll have more to say about a particularly interesting thread in the discussion that implicitly challenges the more or less universal notion that America’s standard of living has soared in the last fifty years. In fact, over the last two decades, it has become painfully obvious to most Baby Boomers that their single-income parents could afford quite a few things that dual-income households these days cannot afford without going seriously into hock.

Regarding the supposed debate between inflationists and deflationists, it seems, blissfully, to have petered out. We assume this is because evidence of serious inflation is almost nowhere to be glimpsed, even by those who are obsessed with Friedman’s evidently misleading explanation of  inflation – i.e., that it is purely a monetary phenomenon (see below).  We would nevertheless still welcome that wake-up call we’ve repeatedly asked inflationists to provide if there comes a day when we can sell our home for a zillion dollars.

Below is the commentary that ran on Monday. There are also dozens of gem-like responses in the forum that we would urge you to read before weighing in yourself:

Adding fuel to our recent discussion of deflation is the latest dispatch from Ambrose Evans-Pritchard, the only big-league journalist we know of who seems to have recognized all along that it is not inflation we should have feared, but deflation. “Don’t be fooled,” he wrote recently in the U.K. Telegraph. “A food and oil price spike is not and cannot be inflationary in those advanced industrial economies where the credit system remains broken, the broad money supply is contracting, and fiscal policy is tightening by design or default.”  Just so.  And yet, there are still those who choose not to see the obvious. We still turn up posts in the Rick’s Picks forum that would have us believe that supposed price increases in day-to-day necessities represent a significant offset to a global financial implosion that has sucked hundreds of trillions of dollars worth of valuation from a global portfolio of leveraged financial assets.

This is hugely deflationary, as Evans-Pritchard notes, and in the case of higher grocery and energy costs, acts “as a transfer tax to petro-powers and the agro-bloc. It saps demand from the rest of the economy. If recovery is already losing steam in the US, Japan, Italy, and France as the OECD’s leading indicators suggest — or stalling altogether as some fear — the Eurasian wheat crisis will merely give them an extra shove over the edge.” This touches on a point we’ve made here before, and more than a few times – that price increases in necessities cannot create inflation if household incomes are stagnant. Think about it:  If the price of a gallon of gas were to rise to $10 a gallon tomorrow, we would simply have to cut back on the consumption of something less important. So where’s the inflation?  Why the answer to this question continues to elude so many is mystifying.  Perhaps those who remain skeptical of deflation’s power are renters who have not experienced the pain of having their mortgaged home decrease in value by 30 percent or more, as has occurred throughout the US.

Most persistent of the inflationists’ delusions is that the Federal Reserve can and will do “whatever it takes” to avoid deflation.  But to believe that easing has not worked so far because the Fed has not eased enough is to imply that some further quantity of easing will do the trick. This kind of thinking is beyond dumb, but when it infects those on the left side of the Congressional aisle, it can be downright dangerous. Tea Partiers to the rescue? They supposedly stand ready to put a lid on yet another round of stimulus, but at this point, probably, most Americans recognize that more stimulus, all of it with money to be borrowed by “the government” (i.e., by taxpayers) from future productivity, cannot achieve much of anything, save burying us even deeper in debt. It manifestly has not stimulated inflation, as Evans-Pritchard notes with this short list of current data: “Yields on two-year US Treasury debt fell last week to 0.50 percent, the lowest in history. Core US inflation is the lowest since the mid-1960s. US business inflation (pricing power) is at zero. Bank lending is flat and securitised consumer credit has collapsed from $900 billion to $240 billion in the last year. Hence the latest shock thriller — “Seven Faces of Peril” by James Bullard, ex-hawk from the St Louis Fed — who fears that the United States is now just one accident away from a Japanese liquidity trap.”

Readers, what do you think?  We would be especially grateful to anyone who can drive a stake through the heart of the oft-repeated phrase “inflation is always and everywhere a monetary phenomenon.”  This phrase, demonstrated to have been worse than worthless for predictive purposes by actual monetary events of the last two decades, originated with economist Milton Friedman but has since been expropriated by armchair theoreticians, monetarists and others who have been more or less continuously –and wrongly — predicting a horrific outbreak of CPI inflation since around 1991. That is when the Fed eased massively (or so it seemed, for those times) to power us out of recession and the S&L crisis. Friedman, like virtually all of the monetarists his theories had empowered, might have been fooled the first time around, when the universally predicted inflationary spiral failed to materialize thereafter. But we wonder what he would think now, had he been able to witness how the cosmic-size stimulus of the last few years failed to produce any inflation whatsoever.

Indeed, recent events have demonstrated that all of the credit-money the Fed is capable of ginning up will not produce even an iota of inflation if borrowers and lenders do not take that money and run with it. Some might say the easing associated with the 1990-91 recession did in fact produce inflation, albeit of equity shares rather than consumer goods.  They would also note that subsequent periods of loose money caused massive inflation of financial assets and real estate.  This line of argument is disingenuous, however, since, even as these inflationary events were unfolding, low CPI inflation was explicitly cited by policymakers as justification for further easing.  Moreover, Alan Greenspan, to the eternal disgrace of an already Dismal Science, regarded all non-CPI inflation not only as benign but, in the case of home prices, as wealth-producing.

We doubt that Friedman would have made so egregious a mistake. Dare we imagine that if he were still alive, that, seeing the catastrophe that Fed manipulation of interest rates had wrought, he’d be more willing to let market forces alone, rather than the central bank, determine when the supply and demand for money were in equilibrium?