Muni Bond Crisis Can Only Deepen

We often disparage the Wall Street Journal for being too spineless to tell it like it is when reporting on the state of the economy, but with last Friday’s lead story, New Hit to Strapped States, they pulled no punches. You can almost pick a paragraph at random and get a sense of how serious the cities’ credit problems are. This paragraph, for instance “Municipalities borrowed $122 billion of variable rate demand debt in 2008, roughly twice the amount of these types of loans borrowed the year before…”  How did they get in so deep?  The answer lies in the way they navigated the shoals of 2008. While most muni-bond debt is long-term, scads of jerry-rigged credit deals were struck that year to get municipal borrowers past the crunch.  For the most part, this involved the use of so-called letters of credit – guarantees by large banks to backstop municipal borrowers when they were having trouble raising cash via bond auctions. Under the circumstances, noted the Journal, “Many municipalities scrambled to convert the debt into other instruments, including variable-rate demand obligations, which are long-term bonds with interest rates that reset periodically. For a fee, big banks guaranteed many of these deals.” 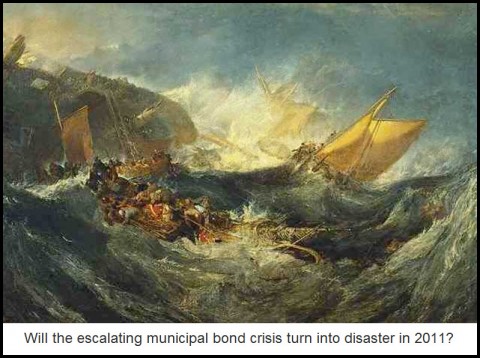 Now, the letters of credit are expiring, and although borrowers must have believed in 2008 that it would be easy to renew them a few years hence, this has not proven to be the case. In fact, if banks are willing to issue letters of credit at all, it is at prohibitively steep premiums.  For municipal borrowers, the only alternative is to pay increasingly punitive auction rates at a time when they are struggling just to pay their bills.  On Friday, those rates hit 5.01 percent for 30-year, Triple-A general obligation bonds, reflecting a ratcheting up of perceptions of risk. A notable casualty was a New Jersey agency that had to reduce the size of a bond issue by about 40%, and to pay a higher rate, because of soft demand.

Fed Has No Control

The Journal story stopped short of saying the cities are effed, but the implication is unavoidable. After all, this is not a market that the Fed can control, and it therefore seems entirely predictable that market forces will continue to raise the risk premium on municipal borrowing, even as cities struggle to balance budgets with a combination of job and spending cuts and tax hikes. You don’t have to be an economist to see that that those supposed remedies won’t work – that they will only energize a deflationary spiral that eventually will push hundreds of cities into bankruptcy before the furies are spent.

Meanwhile, this is one potential bailout that the Fed cannot propagate in the usual make-it-up-as-we-go-along way. That is notwithstanding the fact that the very phrase “Fed bailout of cities and states” crops up almost casually in news stories about mounting  budget crises at all levels of government beneath the Federal.  But we should be perfectly clear about what it implies; for even the mere hint that the Federal Government is considering backstopping cities and states could trigger a run on the dollar so violent as to topple the entire global house of cards.

In the meantime, not only is the credit crisis for cities and states not about to go away, it can only intensify as the year wears on.  For that reason, we have trouble believing that 2011 will pass without a crisis of such severity that it will make us fondly recall 2008.