Wiping the Smile Off the News Media’s Face

(Fearful of spooking readers and angering advertisers, mainstream news sources have been reluctant to tell it like it is when reporting on the economy. Because they remain steadfastly in denial four years into the Great Recession, touting a recovery that has touched relatively few American lives, it could be a long time before we hit bottom, says Gregg White, a regular contributor to the Rick’s Picks forum who goes by the handle “3 Lions”.  In the essay below, Gregg says the news media will have its hands full trying to put a happy face on things when America’s economic troubles deepen and spill out onto the street, as has already occurred in Europe. RA)

The mainstream press and TV business news channels are “paid to be happy” by advertisers and politicians. In some respects they are no different from the official ratings agencies like Fitch, which are also paid to “rate happy.” Having been proven to be worthless over the last several years, the ratings agencies are just beginning to get a bit more realistic – a glimmer of realism, no more. They now know that if they are seriously caught with their pants down again their whole raison d’être will be called into question. The appointment of Ron Paul as the official “hammer” of the FED is another glimmer of hope. At the moment, it is just a small snowball rolling down a mountain, but it is gathering more snow as it rolls. The ratings agencies must have noticed that complacency and deceit are gradually becoming unacceptable. 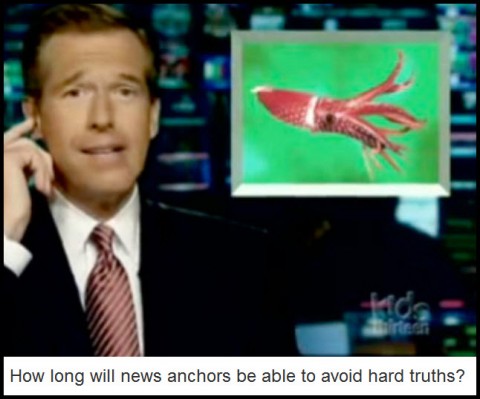 As for the mainstream press, which by and large is bankrupt, a publication’s survival is less likely than a ratings agency’s. Pick up any regional or local newspaper, scan all of the positive editorials over the first three pages, and then turn to the readers’ letters page and you find the reality of people losing their jobs, homes, etc. Editors cannot continue to report “happy” in their newspapers whilst their readers are factually demonstrating the complete opposite. Hence we have the schizophrenic transitional stage in the mainstream press from “happy” to “dire.”

From an economic point of view, this double-standard, transitional stage in the press is still only in its very early stages in spite of the economic slump’s starting almost four years ago. This sluggishness towards the realization of the truth portends a very long depression that will last way beyond the forecasts of even the most ardent bears. Keep in mind that, four years into this economic slump, there has been no increase in interest rates, no stock market crash/slump, no significant city or state defaults and no street violence in the U.S. of the kind already appearing in Europe. All of these things will afflict the U.S., so it will be a serious challenge to editors to try reporting “happy” with all that going on.

It also reflects the evolution of the Internet in the sense that perhaps as recently as five years ago a commentator reporting economic truth in a blog (or whatever they were called in the good-old days) was regarded as a crank, and the mainstream press was regarded as the only place to find the truth. Hardly anybody nowadays would dispute that if you want the economic truth, you can only find it at blogs, etc. online, and that the mainstream press is not to be trusted.

The younger generation that is growing up with this online truth — do you know any young people who read newspapers? — and seeing the heartache caused to their parents and grandparents by the mismanagement of the economy over the last few decades, will be the ones to pull us out of this quagmire, but it ain’t gonna happen any time soon! After all, since the political generation responsible for causing the problems is currently charged with resolving those problems, it does not bode well for the short or medium term.