Finally, a Hyperinflation Argument That Persuades

[Responses to this commentary have been so illuminating and provocative that I am going to let the discussion run for another day.  If you read them all, you may come away believing, as I now do, that neither the hyperinflationists nor the deflationists can claim to know for certain how things will play out. That said, I consider FOFOA’s hyperinflation arguments to be the best offered by either camp. RA]

So, it looks like I’m a hyperinflationist after all.  Reminds me of the joke about the cowboy who chats up a woman at a bar – a lesbian, as it turns out. She tells him she spends her days thinking about nothing but women. “As soon as I get up in the morning, I think about women,” she says. “When I shower, I think about women. When I watch TV, I think about women. I even think about women when I eat. It seems that everything makes me think of women.”  The cowboy goes home that night thinking that maybe he’s a lesbian too.  Another tavern, another night:  A stock broker strikes up a conversation with a stranger who seems obsessed with the idea that hyperinflation is about to wreck the economy. “From the moment I open my eyes in the morning, my head is filled with worries about how the financial system and the world’s currencies are hurtling toward disaster. Watching the stock market rise relentlessly, I grow more certain each day that it can only end badly.  I think the real estate disaster has barely begun and that, for tens of millions of us, the American Dream is about to turn into a nightmare.”   “Hmmm,” says the stockbroker.  “I guess that makes me a hyperinflationist too.” 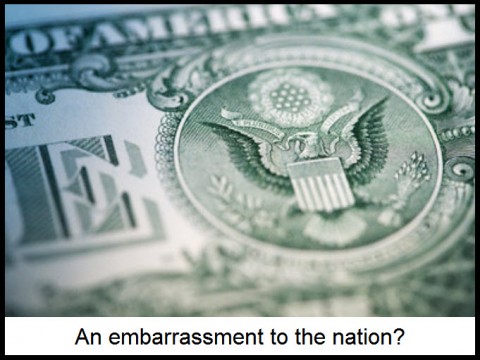 And so it goes. A conversation between a hardcore inflationist and an equally hardcore deflationist might meander for hours without generating much argumentative heat.  That’s because both see the financial system in smoldering ruin after the smoke has cleared; it is only on the matter of how the disaster will unfold that they disagree. I’d thought until yesterday that deflation was far more likely to do us in, turning an endless Great Recession into a Second Great Depression. My scenario called for falling prices and wages, imploding asset values and an economy drowning in bankruptcies. Hyperinflationists are expecting a quite different endgame — one in which prices soar relative to fiat money, debtors pay off loans with confetti, creditors and savers are wiped out, and hoarders of bullion live like kings. I am now convinced, after stridently arguing the case for deflation since the late 1970s, that the hyperinflationists will be right.

Why have I changed my mind?  For the answer, you’ll need to read FOFOA blogspot‘s latest essay, Deflation or Hyperinflation? Nothing I had read before it even came close to making the case for hyperinflation, since the arguments seldom went beyond nebulous theories and shoot-from-the-hip speculation.  This one does, though – and brilliantly: first by deconstructing my strongest arguments with great care and refuting them one by one; then by explaining how human nature itself, impelled by self-interest, will push our debt-addled financial system toward a hyperinflationary dénouement. There are some stunning insights along the way, the moreso because FOFOA is able to bring them to readers by making some heavy ideas go down like a soufflé.  One of them, debated endlessly, questions whether the Powers That Be would “allow” a hyperinflation to occur, since that would render their financial assets worthless.  FOFOA prepares us for his counterintuitive answer by recalling the joke about how, if you want to survive, you don’t actually need to outrun the bear that is chasing you and your friend.  This could be said of the Masters of the Universe: They won’t have to outrun hyperinflation — only to outrun the madding hoards who will be as eager as they to unload dollars in exchange for real things.

FOFOA’s logic has extremely bullish implications for gold. I’ve always been bullish on the stuff myself regardless of whether it is hyperinflation or deflation that gets us. But I was never entirely comfortable with my own arguments, since deflation in theory would render hard cash more valuable than other assets, including bullion. Reading FOFOA’s essay, however, I had an epiphany when he cited a 2002 quote from inflationist Gary North:  “I remember in 1975 hearing C. V. Myers tell attendees at a gold conference, ‘If you get this one wrong, you’ll lose everything.’ He was predicting deflation. He got it wrong. He didn’t lose everything.”  The reason Myers didn’t lose everything was that he owned gold up the wazoo, even after it peaked at $850 in 1980.  I know this because Myers wrote about it in his newsletter, but also because when I interviewed him at his Spokane home for a freelance article I’d pitched to Barron’s, he let me fondle the largest solid-gold nugget I’ve ever seen outside of the Smithsonian.  It was sitting on his desk, along with rolls of gold coins that today would be worth as much as a house.

Some of you will know Vern Myers as one of my guiding lights.  It was his 1977 book The Coming Deflation, with a logic that seemed immutable, that made me a deflationist. He argued, simply, that “Ultimately every penny of every debt must be paid – if not by the borrower, then by the lender.”  This implied, for one, that if debtors walked away from their mortgages, it would reduce the wealth of their creditors by exactly the amount that had been owed. Deflationists would logically infer from this that a nearly quadrillion-dollar derivatives bubble that has yet to implode will shrink the world’s wealth by that amount when the collapse finally comes. However, FOFOA (whose identity apparently is a well-guarded secret) explains how all of the hyper-leveraged paper underlying the bubble is likely to be redeemed at face value. That would be hyperinflationary, of course, but those who are able to get their hands on the money first -i.e., the Masters of the Universe – will have a chance to spend it before it becomes completely worthless.  This has implications for the mortgage debt that I have always insisted the Masters would not forsake by promoting a hyperinflation. More likely, explains FOFOA, is that home prices will go “hyper,” and that if you are prepared to swap gold for dollars at the perfect moment, you may be able to pay off your mortgage with proceeds from the sale of just a handful of gold coins. (To access timely and precise forecasts for gold, silver and other investment vehicles, click here for a free trial subscription to Rick’s Picks.)

This essays deserves to be read by the widest possible audience, since it explains so clearly why we must hold gold in preparation for the dollar’s collapse. As far as I am concerned, a more compelling argument for hyperinflation has yet to be made.