Helicopter Ben was deep in denial yesterday following a two-day Fed meeting, telling reporters he’s puzzled by recent signs of deterioration in the economy.  “We don’t have a precise read on why this slower pace of growth is persisting.” Is this guy a hoot, or what?  Earth to Bernanke: The Great Recession never ended!  In fact, the term “Great Recession” itself is popularly used by plain folks to assert that economic hard times are very much with us, notwithstanding brazen statistical claims to the contrary.  As anyone can see, many trillions of stimulus dollars have yet to improve a dismal employment picture one iota — only kept it from getting worse; nor have those “dollars” boosted household incomes or real estate prices. What they have boosted are bank profits and the prices of stocks, commodities and basic goods.  Surprising no one, Mr. Bernanke also failed to mention the still-deflating housing market as a possible reason for the punk economy.  Who but a Fed chairman could fail to connect the dots?  It seems not to have occurred to him that consumers are no longer binging because their homes have continued to plummet in value – another 4.2% in the last quarter alone. 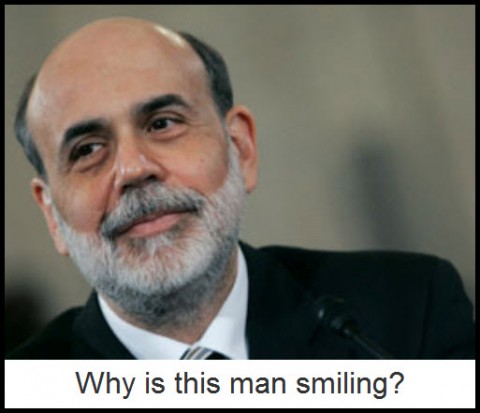 In a policy statement issued after the meeting, the Fed muckety-mucks blamed the usual suspects for the weakening economy: higher energy prices and the disaster in Japan.  Perhaps Bernanke had second thoughts about trotting out such a lame explanation, however, and that’s why he deflected the matter by feigning cluelessness. Whatever the case, although he further widened the cognitive gap between the government’s spinmeisters and the working stiff, the Fed chief may have bought time to feign yet more cluelessness when he admitted that the…”sluggish recovery” could linger into next year.  We wonder what he sees for 2012 that could change things for the better, since even realtors and developers who are usually giddy with optimism seem to have accepted that there isn’t yet any light at the end of the tunnel – at least, none that can be discerned by the uncompromised eye.  Unfortunately for Mr. Bernanke, no matter how little he tries to say, he’ll have to give away his game when QE2 sunsets at the end of the month. You can bet that whatever form QE3 takes, it will be called something else. Bernanke and Obama can count on the mainstream media to go along with the ruse and to tell us as often as needed that the Emperor is wearing a fine suit of clothes, but we’ll look to Europe’s editorialists to call the next phase of Fed monetization by its proper name.