It warmed the cockles to see the Dow Industrials and Gold moving in opposite directions yesterday, even if the latter swooned a nasty $15 intraday before scaling the wall a second time to close near the highs.  The world somehow makes more sense to us when gold prices are rising and shares are falling.  Isn’t that what’s supposed to happen when the central banks are hell-bent on trashing their respective currencies, and every economy outside of China’s continues to grind toward cliff’s edge?  The news wasn’t all bad, either. For one, scientists have apparently made some progress in figuring out why Lyme’s disease recurs in some people. Much closer to Wall Street obsidian heart was a report from Alcoa that profits had more than doubled in the second quarter.  Unfortunately, you’d have to be an old-timer to remember when good earnings from the likes of Alcoa was enough to push the U.S. stock market higher.  Anyway, probably a dozen Alcoas would not have made up for the deepening gravity of Europe’s financial plight. Whereas it supposedly was only Greece that was in need of critical care, now Italy has joined the short list of financial basket cases close enough to disaster to take the whole system down. 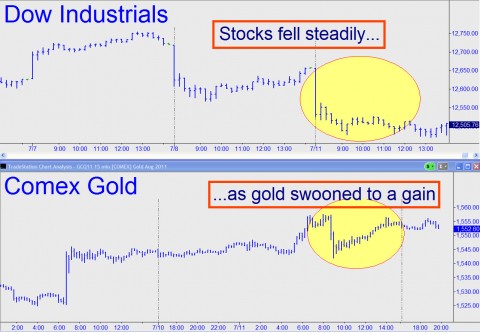 And yes, we are being deliberately ambiguous when we avoid mentioning which “system” might come crashing down.  Europe’s financial house of cards?  The global banking system? The world economy? Frankly, we can’t even guess how far the damage might spread if “confidence” in Greece, Italy…Spain! were suddenly to evaporate.  We’ve put quote around the word “confidence” because only an imbecile could fail to see that whatever confidence exists is egregiously misplaced.  Even so, misplaced confidence is better for the time being than no confidence, since it’s all that’s keeping the global financial system marginally afloat.  How deep and wide does the misplaced confidence go?  Not very, we’re certain, although the mainstream media is doing its best to help maintain it – maintain the fiction that Europe’s problems are soluble. Thus did the Wall Street Journal note, in reporting on the looming Second Fall of Rome, that just two weeks ago the financial community regarded Greece’s problems as largely contained. Seriously?  Although we hesitate to lump the financiers with the aforementioned imbeciles, could anyone have thought the desperate deals struck to keep Greece temporarily out of default will hold? In fact, if there’s a containment strategy, it is having the rating agencies come down on Greece as though the rest of Europe, and of course the U.S., weren’t in the same, sinking boat.  Our Australian colleague Bill Buckler, intrepid editor of The Privateer (click here for a free sample),  framed the issue squarely when he noted that America owes more per capita than Greece.  Just so.  How much longer will the ratings agencies be able to divert a jittery world’s attention from that fact?