Two Tips for Permabears Eager to Short a Major Top

We got short at the top on Friday, but how long will Mr. Market let us enjoy the ride? Our vehicle, QQQ put options, nearly ran off the road on Tuesday when the Dow began the day with a 125-point rally. A pullback in the early going shaved that gain by two-thirds, but by early afternoon bulls were beating on the highs, threatening to send bears into a new round of short-covering. The pessimists got a reprieve, however, when something spooked the market late in the session, sending the Industrial Average into a 225-point dive that left it 66 points lower on the day.  It was not a session for the faint-hearted. Still, the outcome boosted the value of our put position, leaving Rick’s Picks subscribers in good shape to try to lock in a profit no matter what the stock market does as 2011 draws to an unpredictable close. 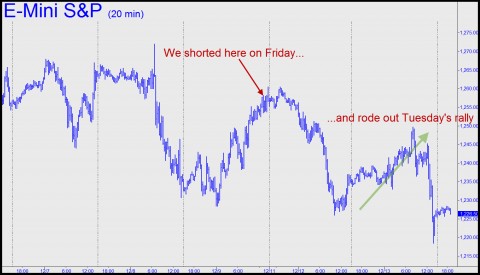 On Friday, we’d actually been bullish for most of the day in anticipation of a powerful rally in the E-Mini S&Ps to exactly 1259.25, a Hidden Pivot target. With ten minutes to go before the bell, the futures got as high as 1258.50, and so we sent a bulletin to subscribers telling them to get short by buying January 54 puts for 0.96 in QQQ. This equity-based vehicle corresponds to the S&P futures and was making its high at 57.17. Although we rarely advise opening a position on a Friday afternoon, the circumstances strongly warranted it. This time, taking a gamble paid off when the new week began. Monday’s gap-down opening caused our Jan 54 puts to spike to as high as 1.25, and so we told subscribers to take a profit on half the position.

Now that the selling has resumed, our goal will be to spread off our remaining risk by selling some puts of a lower strike against those we still hold.  If we are able to do so for more than we paid for the January 54 puts (whose costs basis, by the way, was reduced by partial profit-taking on Monday to 0.76) then we’ll have a bearish position that cannot lose and which would show a maximum gain of $200 per spread if the QQQs fall 7% or more between now and January expiration. But the weakness needn’t be so severe in order for the position to reward us, since it would require a decline of just 3.3%, to below 54, to go into the black dollar-for-dollar with the underlying vehicle.

Now for the two tips we promised permabears who are understandably eager to get short at a top that will endure for a long time. First, although there’s nothing wrong with shorting at every opportunity, even minor-trend rally targets, we should never assume that whatever selloff follows is a resumption of the Mother of All Bear Markets. Odds are against this, since the broad average have been mostly moving higher for the last 33 months. If you keep this well in mind, you are less likely to make the mistake of going “all-in” based on your emotions.  Which leads us to the second tip:  Take partial profits the first chance you get, even if the initial take-out is minuscule. This should be routine on all option trades, since time decay will sneak up and clobber you from behind if you gloat for more than a couple of days about a winner.  Option trades advised by Rick’s Picks almost invariably use this tactic, but we also go a step further if the trade moves our way, selling puts/calls for a sum equal to or greater than what we paid originally.

Naturally, we play both sides of the market, up or down. If you want to see the ideas described above in action, click here for a free trial to Rick’s Picks so that you can follow our efforts to leg into a bullish butterfly spread in the SPY, an optionable vehicle that tracks the S&P Index.