With last week’s rally, the broad averages turned in their best first-quarter performance ever. Supposedly, it was upbeat data on consumer spending that helped push the rally into the record books. But if consumers are actually starting to loosen up – using credit, of course, since household incomes have been stagnant —  the evidence is nowhere to be seen. The nation’s retail landscape in fact remains blighted with boarded up stores and gangrenous malls. Last week, Best Buy became a candidate for the death-watch list with the announcement that it plans to close 50 stores and lay off 400 workers as part of a plan to save $800 million in recurring costs. The consumer electronics giant also plans to move away from the big-box format that helped put so many competitors out of business. Now Best Buy is itself the victim of an even bigger player, Amazon, which, with free shipping and no sales tax, can meet or beat any price Best Buy can offer.  How are you going to compete with that?  Answer: You can’t. And that means that the closing of 50 of Best Buy’s 1100 stores could be the beginning of the end, just as it was for Borders and Blockbuster when they began to shrink to compete more efficiently with, respectively, Amazon and Netflix. 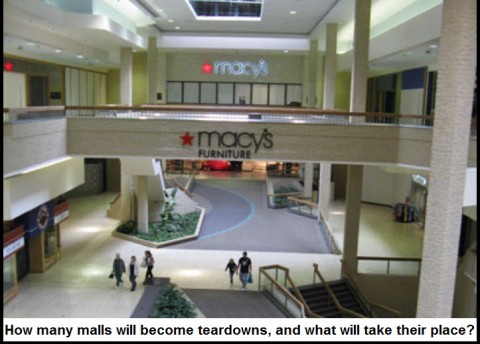 Best Buy’s retrenchment will not be welcome news for commercial real estate developers, who have yet to recover from an unending stream of big-box closures, including Comp USA, Borders, The Great Indoors, Circuit City and Linens ‘n Things, to name some of the more recent ones. Their bankruptcies have glutted the market with more space than could be absorbed in a decade — and that’s assuming there are new businesses ready to move in that can pay the rent on showrooms the size of football fields. That’s not to say there are no new tenants to be found, only that there’s a limit to the number of physical fitness centers, grocery stores and discount retailers that can step into the void. In the meantime, there are reasons to think that the growth in commercial vacancies will quicken rather than slow. One retailer alone, Sears, which has been in a death spiral for more than a decade, is going to blow a huge hole in the rental picture when the company finally goes down, probably within the next two years. And on Main Street, there will be yet more vacancies when independent movie theatres that have somehow survived until now close because they can’t afford the $65,000-per-screen digital conversion needed to stay in business after Hollywood stops shipping celluloid prints at the end of 2013.

Considering that America’s GDP is 70% consumption-based, we are mystified by all of this talk recently about a supposed recovery in household spending. Yes, we’re aware that each new 10-cent increase in the price of gasoline is trumpeted by the government’s sleazy, mendacious spinmeisters as an increase in sales. And the restaurant business, at least here in Boulder CO, is booming so strongly that one might think no one eats at home any more. But it beggars belief to suggest that such factors are leading the nation back to prosperity. Not that America’s middle class is likely buying any of it. With retirement dreams fading fast, home prices still falling, health care costs soaring beyond affordability and grocery prices inflating at a scandalous rate, probably few outside of Wall Street and the newsrooms believe there is any recovery at all. Do you?