What Gold Lacks Is Short-Covering Panics

With the world in the throes of an unprecedented credit blowout, gold’s failure to crack $2000 barrier can sometimes seem mystifying – the moreso as the correction begun in 2011 stretches on, now into an eighth month. Gold has acted more like wheat or corn than like money. Shouldn’t it reflect the fact that dollars, euros and yen are available to an insatiable group of borrowers, mainly large banks, at no cost and in practically unlimited quantities? Indeed. And yet, lately, gold has been unable to muster the ire, even, of crude oil, which appears to be gathering thrust for its first foray above $120 since 2008.  Meanwhile, Comex Gold has been lazily backing and filling since last September. If gold is not oblivious to the steady and relentless destruction of currencies, it seems unpersuaded that this is what the central banks are accomplishing by design. 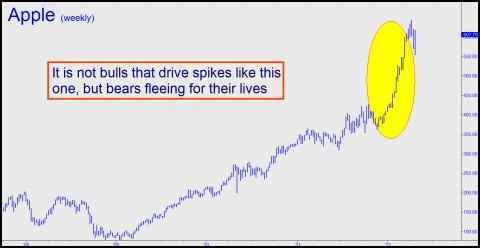 From a purely technical standpoint, gold’s reluctance to get in gear with crude, and to start acting like it knows what the central banks are up to, is not so mysterious. Let me explain.  I have written here many times that it is not bullish buying that drives stocks relentlessly higher in bull markets, but short-covering by bears. This was a dynamic I got to observe first-hand in the dozen or so years I spent on the trading floor of the Pacific Exchange. While bulls often rationalize their buying strategies by citing “fundamentals,” they probably understand at a gut level that PE ratios are no more useful a predictor of where a stock will be trading in six months than tea leaves. Small wonder, then, that bullish sentiment alone cannot summon the kind of torpedoes-be-damned buying it takes to drive shares through massive levels of supply.  But short-covering can, since the buying is rooted in the primal fear of losing money as a stock or commodity that one has bet against surges maniacally higher.

Unfortunately for gold bulls, this fear is nowhere to be found in bullion markets. Think about it.  Who are the shorts?  Mainly, bullion bankers with friends in the very highest places.  Shorting “paper” gold amounts to free money for them because, in a pinch, to cover short-term obligations, they can borrow as much of the real stuff as they need from their good friends at the Fed, which holds a reported 7000 tonnes of the stuff for its friends.  They are all aggressively united behind a monetary agenda of their own – one that is not particularly friendly toward $2000+  gold. Even so, and despite the ability of the bullion bankers to gin up a hundred times as much paper gold as their exists physical, quotes have muscled their way higher nontheless. Had officialdom’s suppression of the gold price been more successful, prices would currently be languishing below $500 an ounce. Instead, gold has traded as high as $1928, its ascent managed so as to avoid a day of reckoning for bullion bankers.  The easy money is still on the short side, and so it shall remain as long as Morgan Stanley, J.P. Morgan and their ilk can collude behind-the-scences with government to hold prices down. This alliance has proven remarkably effective – so much so that gold (and silver) have gotten cold-cocked at exactly those times when we might have expected paper shorts to get blown out of the water. One of these days, in response to a financial cataclysm whose dimensions cannot be precisely foreseen, those on the other side of the trade will press their claims for physical gold. We shouldn’t kid ourselves that The Powers That Be do not have a plan in place to turn back the mob. Although that might briefly appear to save the day for J.P. Morgan et al., it is not likely to save the financial system, nor perhaps even the Republic.

Win a Subscription Worth $106!

If you aren’t already receiving these commentaries by e-mail, sign up now and you’ll be automatically entered in a weekly drawing to win a three-month Rick’s Picks subscription worth $106.  Click here to register. What do paying subscribers get that lurkers don’t?  Plenty, including detailed daily trading “touts” and access to a 24/7 chat room that draws traders from around the world.