At CMRE Dinner, Talk of a Looming Disaster

I’m in Gotham (photo below) for the annual spring dinner of the CMRE, the Committee for Monetary Research and Education.  The members come mostly from the financial community, although they are hardly what one would call Wall Street types.  More like libertarian firebrands, deeply committed to sound money, truth and accuracy in journalism, free enterprise and muscular capitalism.  Herewith, as promised, some  highlights from the CMRE’s annual spring dinner, held recently at the Union League Club:

Edwin Vieira Jr.:  Google this guy if you don’t know who he is.  A renowned Constitutional lawyer with a gift for oratory, he brings crowds to their feet. Economically and politically speaking, says Vieira, the stage has been set for a “catastrophic” event. The Fed, meanwhile, has usurped a degree of power that is unknown to America’s system of laws. But take heart, all ye who think a gold standard has only a remote chance of being re-instituted. In fact, says Vieira, under the provisions of Article 1, Section 10 of the Constitution, a growing number of U.S. states are opening the door to bullion as payment for private transactions.  On the (very) scary side, Vieira averred that an American firm has been awarded a contract by Homeland Security to provide 750 million rounds of .40 caliber hollow-point ammunition to the U.S. Army. This type of bullet is designed for just one purpose, warns Vieira: killing civilians. 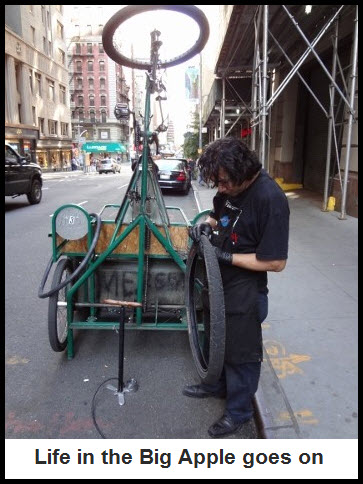 Paul Brodksy: a money manager with QB Asset Management, he says a U.S. hyperinflation would require only an edict from the Fed stating that, effective immediately, the new price of an ounce of gold will be $10,000. Devaluation is the only way out for an America drowning in debt, Brodsky asserts.  And don’t think it would hurt the banks; they would love it, he says, for they care not what the value of the dollar is or about the level of real interest rates, only about the spread between their own borrowing costs and what they charge customers. Devaluation in this way would play havoc with our trading partners in Europe in Asia, says Brodsky, but that would be their problem.

Francine McKenna: a former auditor with Price Waterhouse turned muckraker/blogger, she has become a force for truth in the otherwise pathetic world of journalism. McKenna has appeared many times on Max Keiser’s show and refers sarcastically to the Wall Street Journal as “that prestigious media organization.”  She notes that Big Money is quietly shifting toward Romney, presumably because they sense Obama’s ship is sinking. Concerning the financial Day of Reckoning that we all know is coming: “There is no protecting your money or your gold. In the end, there is only you.”

Jim Sinclair: a guru known for putting his money where his mouth is, mainly in gold assets, he sees the U.S. as having entered the “darkest period in financial history.” Trust and truth have vanished from the financial world, he says, making it impossible to determine whether J.P. Morgan’s recent trading loss will turn out to have been $2 billion, $10 billion, or perhaps even more.  Regarding the coming cataclysm, we are “a lot closer to seeing things take their course” than most people might imagine, warns Sinclair.

Bob Hoye:  CMRE’s official historian, Bob notes that Homestake Mining paid a generous dividend during the Great Depression as the company’s shares rose steeply in value. He sees gold stocks and precious metals in a final shakeout as the broad averages get slammed over the next several months. Thereafter, look for bullion to emerge from its wallow to become the premier investment asset during hard times. Over lunch at the Second Avenue Deli, Bob waxed enthusiastic about one gold stock in particular: Almaden Minerals Ltd. [AAU].

Prince Michael of Liechtenstein: Although we usually lump Europe’s bumbling, socialistic planners together in one sorry lot, Liechtenstein’s budget is actually in balance thanks to the pro-growth, prudent stewardship of His Highness, Prince Michael. Would that Belgium followed the same principles! It was a big mistake, he said, to allow all nations belonging to the EU to borrow at the same low rates.

Frederick Sheehan:  Author of Panderer to Power: How Did We Get Here, readers can probably figure out for themselves which egregious Fed chairman the title refers to (hint: he was, in Sheehan’s words, “the messiah of easy money”).  Sheehan was the night’s wittiest speaker, and his book, which I have not yet read, is filled with amusing anecdotes about those who run/ruin our economic lives. He noted that Prof. Paul Samuelson, reading Bernanke’s Princeton PhD thesis, must have thought, “What an apple-polisher.” Some feared Bernanke was so wedded to his mathematical models, said Sheehan, that he would refuse to forecast an economic downtrend. This fear was of course borne out by events. Of a recent Greenspan interview on network television, Sheehan wondered aloud, “Who would still interview him?”  Rather than accepting blame for the financial catastrophe that his tenure at the Fed set in motion, Greenspan has instead blamed Americans, who, he said, chose a “welfare state” over the discipline of gold.

William J. Bergman:  As an employee at the Chicago Fed years ago, Bergman prepared reports on how the economy had performed in the previous six weeks. You can forget about predicting what the economy will do in the months and years ahead, says Bergman, author of Money and Power: The Chicken or the Egg. “A lot of us had trouble figuring out what had happened last month.”

Bill Rochelle: an expert on bankruptcy law, Rochelle aserted that, contrary to its public pronouncements, M.F. Global knows where “every farthing” of the supposedly missing $900 million is. Why don’t they tell us, then?  According to Rochelle, it would require an admission that the money will never be recovered – that it went to quell margins calls from J.P. Morgan, Citi et al. And don’t expect any prosecutions either. The perps have shielded themselves from legal jeopardy by getting their lackeys in Congress to pass the “safe harbor” statute. Nevertheless, said Rochelle, we can expect the can of worms from this scandal to explode around election time.