Stocks Galloped Higher in 1929, Too

As usual, the stock market was vexatiously out of step with reality last week, soaring on word that the ECB plans to do “whatever it takes” to preserve the euro and the political union that it binds. For U.S. investors, especially those who believe in hope and change (and, presumably, the Easter Bunny), there was also the invaluable news that the U.S. economy is once again verging on recession – a development which is widely believed to portend yet more Fed easing. Completing the delusional vision that good times are soon to return nonetheless, crude oil finished the week with a gain of about $4 per barrel.  Of course, no one actually believes that so strong a recovery impends as to squeeze current supplies of crude that are more than adequate. Even so, the news media, feigning ignorance of forces that have been pushing the global economy toward an abyss, and abetted by the stock market’s steroid-addled lunge, were only too happy to report events in a way that did not challenge officialdom’s cynically crafted, positive spin.  The Establishment’s most useful memes were dutifully trumpeted by The Wall Street Journal in two headlines that ran above the fold on Friday:  Weak Economy Heads Lower, said the topmost, in a heavy font; and, immediately below it, in italics, the implicitly good news:  Markets Jump as European Leaders Vow to Protect Euro; Flagging U.S. Recovery Could Spur Fed. 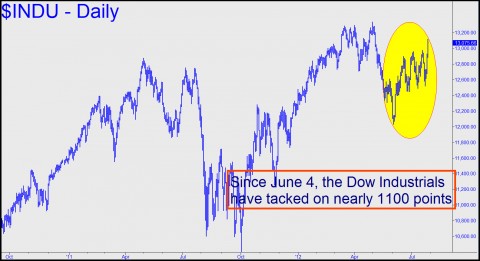 Such headlines have the seeming heft of history-in-the-making. Notice, however, that it is not facts that have borne this weight, but mere hope and speculation. To say the markets have responded positively to some banker’s speech is hardly an assurance that the ECB’s latest nostrums will work.  As for the Fed’s supposed ability to revive the economy with yet another monetary nudge, it is only on Wall Street where the cynicism such speculation evokes could produce an ostensibly positive outcome – i.e., last week’s 600-point surge in the Dow.  Despite such effusions, however, there is growing tension between the stock market’s ebullient leaps on the one hand and mounting perceptions on the other that the global economy is poised to collapse.  Under the circumstances, we imbibe headlines like the ones above with a growing sense of foreboding. The reassurances that our leaders seem increasingly desperate to promote are perforce muted by the echo of headlines from the past. Below are a few to ponder as we bear witness to the stock market’s inscrutable rise. All appeared on the front page of The New York Times during the summer of 1929.   While a few of them suggest that little has changed, others seem ominous in hindsight:

And we all know the rest.  If there’s a lesson in this sequence of headlines, it is that we should batten the hatches if and when the stock market’s daily gyrations become front-page news in the The New York Times.  Of course, the worst conceivable outcome would be a market that fails to gyrate, instead collapsing in a flash crash so devastating as to crush all speculation about a recovery.

Trading stocks, options and commodities in these treacherous times calls for great patience and skill. Click here if you’d like to see how Rick’s Picks approaches the challenge.