The Looters Are in Control

[And now it’s time for Mr. Obama to start paying for all those votes by reaching deep into our pockets. If you intend to avoid paying your “fair share,” however, please take note: There will be  few places to hide. For a gimlet-eyed view of what may lie in store for taxpayers and citizens of all political persuasions during the next four years, ponder the guest commentary below, from Wayne Siggard, a regular in the Rick’s Picks forum. RA]

The election was all about new math:  47 = 51. The foresight and genius of the Founders knew no bounds.  Ben Franklin said, “Once the people find they can vote themselves money, that will herald the end of the republic.”  The trumpets have sounded.  The heralds have announced the awakening of the masses to that reality.  The greatest and most free nation the world has ever known has just sold its birthright for a mess of pottage; or, at least, the promise of an Obama phone. The takers have voted to take control over the producers. 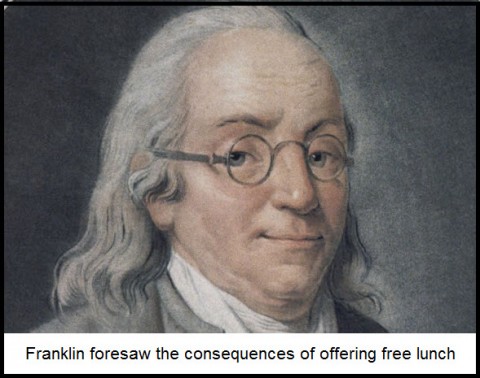 Everyone will now get a fair shot — except that those who work in government and those who take government welfare will get a fairer shot.  Obama knows that you didn’t build that company.  You didn’t live frugally and save more money than your neighbor while they spent theirs on drugs or riotous living.  He knows this because he didn’t get anything without government assistance — affirmative action put him ahead of more qualified people who earned a spot that he took, just like Elizabeth Warren. You couldn’t possibly have gotten anything on your own merit or hard work.

A claim for material position can be met only by a government with totalitarian powers. – Friedrich von Hayek

Have you ever experienced the disdain and contempt of a bureaucrat whose permission you sought?  It used to be that their power to grant a license or permit was retribution for their pay being less than that of the private sector.  Now, you get to pay them 50% more than you would get for the same job, and the disdain has not decreased.  Firemen, police officers, and military personnel can retire as young as 38, many making over $100,000 per year if they work until 50, and many can take another job and collect another pension on top of the first.  Meanwhile, according to the Census Bureau, the average middle class family’s income has decreased $4,019 during the Obama years, to $50,964.  More than half of the lifeguards in Newport Beach, CA, make over $150,000 per year and can collect more than $100,000 in pension benefits starting under 50 years of age.

That paradigm of preternatural  prestidigitation, the Federal Reserve Bank, will continue its policy of zero percent interest.  The big banks will mask their insolvency with free money from the Feds.  Greedy speculators and fools who overspent on housing will have their mistakes paid for by those taxpayers who had the foresight to save and invest wisely.  Obama bundlers and other insiders will continue to get billion dollar investments from the government, sucking valuable capital from the private sector. The official inflation rates will miraculously stay low while you are paying 100% more for gasoline and food.

History is largely a history of inflation, usually inflations engineered by governments for the gain of governments. – Friedrich von Hayek

Foreign nations are no longer purchasing U.S. government bonds. The largest purchaser is the Federal Reserve Bank.  In other words, the government is printing money from thin air. In 1970, you could go to Las Vegas and buy a silver dollar for one paper dollar. It now costs around $35. A mansion behind the Beverly Hills Hotel sold for $200,000. It resold in 2004 for $16 million. A house in Flintridge, CA, sold for $115,000.  Its current value is $4.5 million. The base price for a Corvette was $5192.  It is now $49,600, a comparative bargain.  What you could buy for $1 million in 1970 now takes $36 million.  Senator Everett Dirksen in the 1960s is reputed to have remarked,” a billion here, a billion there, and pretty soon we’re talking real money.”  You can now add three zeros.  The bottom line is that if you are collecting 0.15% interest on your CD, you are losing real purchasing value of at least 10%, and that rate will be accelerating in the next four years.  Carlo Ponzi was a hopeless naïf compared to our elected officials.

Harry Reid Has a Plan

Harry Reid already has a bill on his desk which requires that all pension plans (except for the unions, of course), 401Ks, and IRAs be converted to annuities from the government.  This pile of cash represents the largest pile of readily available cash in the world right now.  The money will be gone as soon as it hits the government’s account, and you will be left with empty promises.  There is no money, only a printing press.

Capital export controls will be enacted.  You will not be able to get your money out of the country.  Already you can no longer open a bank account in Switzerland unless you have over $30 million because the reporting requirements are too onerous for a smaller account.  All requests to Switzerland for visas from Americans will be suspended. History will be repeated (shocking, I know), and all gold in private hands will be confiscated.  The Republicans will cave, the tax rates will rise, and anyone making more than the insider politicians and government employees will encounter ever-increasing marginal tax rates.

Payoffs for votes will be made.  Affirmative action requirements will be increased in every field of endeavor.  Women’s abortions and contraceptives will be free. Regulations will stop the advent of fracking and the boom in oil and natural gas will come to an abrupt halt.  Payments to environmental groups for lawyer’s fees will expand exponentially.  Government-controlled lands with oil and gas potential will be declared wilderness or national monuments, just like Grand Staircase-Escalante in Utah.  I could go on for another ten pages, but , in a nutshell, the message from Mr. Obama is, “You lost.”

And finally, Israel has recognized that Mr. Obama will offer no succor.  Before the end of January, they will raid Iran.  Gasoline will reach $7 per gallon, and voila, solar and wind energy will be competitive.  No matter that your thermostat is set at 40 degrees, if you can get fuel or power.

The looters are in control.  Set your alarms.

(Click here for a free trial subscription to Rick’s Picks that includes access to a 24/7 chat room and ‘Harry’s Place’.)