[Turns out it was our own Doug Behnfield  — good friend, astute financial advisor and occasional contributor to Rick’s Picks  — who in June 2010 coined the term “fiscal cliff.”  Readers may remember his essay, which took its inspiration, metaphorically speaking, from the suicidal ending of the film Thelma and Louise.  In the guest commentary below, with the U.S. a literal inch from the cliff, Doug describes a likely outcome. One thing’s for sure, he notes: No amount of political squabbling will spare us the very real economic pain it will take to bring the national budget into balance. RA]

Recently, I was back in Connecticut visiting my mother. She doesn’t have a computer and hence, no internet. As a result, I relied on my Smartphone and an “app” to check in on financial news most of the time. On one particular day, I noticed that every single news item contained “Fiscal Cliff” in the title or the text. It reminded me that it is rarely the problem staring us in the face that affects the markets. It is the one lurking in the shadows, grasping a two-by-four. Lately, mainstream economic forecasts for economic growth for the current quarter have dropped below 1%. The recession may have begun. An agreement not to do anything right now on tax increases and spending cuts has probably been priced into the market. A recession has not. 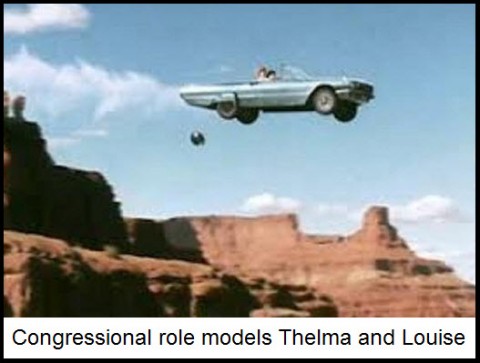 I also recalled that I had used the Thelma and Louise analogy some time ago in one of my quarterly commentaries. [Note: It ran here in June 2010 under the title Thoughts on the Great Society.]  Apparently, I was the first one to coin the term, more than a year before Alec Phillips came up with it and almost two years before Ben Bernanke popularized it.

“The fiscal cliff is a term that was first used in a report dated October 21, 2011, written by Alec Phillips, a Goldman Sachs economist, then popularized by Chairman of the U.S. Federal Reserve Ben Bernanke as a way to refer to the effect that could result if the number of laws in place currently are not changed before the beginning of 2013.” (Boston Globe.)

Actually, my reference was to the growing fiscal crisis rather than the agreement that resulted from the “Super Committee’s” miserable failure. They did not exist in June, 2010. And in retrospect, my comments were probably way too optimistic. Here we are, days from the current version, and President Obama vacationing in Hawaii, and absolutely nothing has been accomplished beyond “kicking the can down the road.” However, the survival of the nation’s financial system is dependent on a dramatic reduction in our budget deficit, and quickly. If we do not get ahead of it, we will become a banana republic. The interest on the national debt will double between now and 2020 even assuming that borrowing rates stay right where they are, according to Lacy Hunt of Hoisington Management. I spoke to him at length recently to pick his brain on the dilemma facing policymakers. Lacy is one of the economists who believes that we are either in, or headed for recession and he has written quite a bit on the economic impact that spending cuts and tax increases have on growth.

The political debate pits spending cuts against tax increases and because both issues are painful and abhorrent, little progress has been made. Like most things political, emotions run high. Here are some of the points that Lacy made in our conversation (with permission). They relate to the multiplier effects that various policy actions have on the economy.

•           Reducing or eliminating deductions while lowering marginal rates (like Ronald Reagan/Tip O’Neill did in 1986) had a negative impact of 0.5 times

•           Increasing spending and lowering taxes has the opposite effect

Several tax increases are already booked for 2013 or that require legislation to avoid, even if the Fiscal Cliff is postponed:

These numbers, both the multipliers and the tax increases, are estimates. The reason they are somewhat simplistic is because it is hard to model anything in the relatively new paradigm of credit contraction and low organic consumer demand that we currently suffer from. However, one thing seems clear: Higher tax rates are more likely to hurt the economy than spending cuts. Less clear is whether a stronger economy would make up for the human cost of reduced transfer payments to the recipients of food stamps and unemployment benefits, not to mention Social Security and Medicare. The dilemma is that if the economy is already weak or contracting on its own, sacrifices on the budget can actually result in bigger deficits, because households experience a reduction in income, people lose jobs and tax revenues tank.

In the final analysis, both sides in the political negotiations are unlikely to give in when faced with the time clock running out and even less likely if there is clear evidence that we have entered a recession. So a reasonable sequence of events is that for a variety of reasons, compromise fails in the lame duck session so they extend the current budget for six months and the new Congress goes to work on a thoughtful attempt to come to some sort of resolution. But by April, the recession that may have begun last quarter (Q3 2012) finally shows up in the revised data. Hasty, forced austerity is abandoned in favor of crafting meaningful tax and entitlement reform, combined with streamlining of federal bureaucracy, isolationism and protectionism. While were at it, the recession ends in a couple of years and so does the secular bear market in stocks and the accompanying extension of the secular bull market in bonds (decline in interest rates). It is hard to imagine that we turn the corner without a meaningful improvement in the national balance sheet, and it is going to cost us, both in time and money.

Lacy Hunt pointed out that Thomas Hobbes, the great 17th Century thinker, said that income is a measure of what one contributes to society and consumption is a measure of what one takes. His point is, from an entirely economic (rather than political) perspective, tax increases and spending cuts that target spending rather than income will be far more effective in solving our nation’s fiscal crisis.

[Click here for a free trial subscription to Rick’s Picks that includes access to a 24/7 chat room and timely trading touts.]