Apple Drops a Turd in the Punch Bowl

(The guru who takes a victory lap invites the market gods to smite him with a bolt of lightning. Even so, because things have worked out very precisely for a recent forecast drum-rolled here, I am airing yesterday’s commentary for a second day.  In after-hours trading Thursday evening, Apple shares had dipped down to a so-far low of 447.36 — exactly 19 cents from the 447.55 target disseminated to subscribers a week ago when AAPL was trading above $500 and rising.

Battered and bloodied bulls should cross their fingers, however, since any further, decisive slippage beneath the targeted low would imply that Apple could grope its way down to 438.66 in search of better traction. Originally, Rick’s Picks had told subscribers to back up the truck and buy shares aggressively if AAPL did indeed fall to $447.55. However, because this “Hidden Pivot” target has in fact been hit outside of regular hours, we are now suggesting that any buying be done either with a very tight stop-loss (i.e. 36 cents or less) or via a “camouflage” entry technique well known to those who have taken the trading course we offer from time to time. Click here for detailed information about the upcoming March webinar. RA]

We had been looking for Apple to fall to at least $461, or to $447 if any lower — a correction of about 37% from September’s all-time high of $705. Last week, however, with the stock in the throes of a deftly engineered rebound after having gone no lower than $483, we moved to the sidelines. As we explained in a headline at the time, We’ll Sit Out the Short Squeeze. And so we did, as Apple climbed to a recovery peak of $528 in off-hours trading yesterday afternoon.  That peak proved fleeting, however, to put it mildly, since one could have bought the stock 90 minutes later for as little as $457.

What could account for such violent price fluctuations?  For starters, there was the usual confluence of village idiots (aka “Wall Street”), headless chickens and panicky shorts waiting for the big announcement from Cupertino. All it took to send these nervous Nellies colliding like particles in an atom smasher was some disappointing earnings news.  This, Apple duly supplied after the close with a report that profits for the most recent quarter had remained flat for the first time in years. 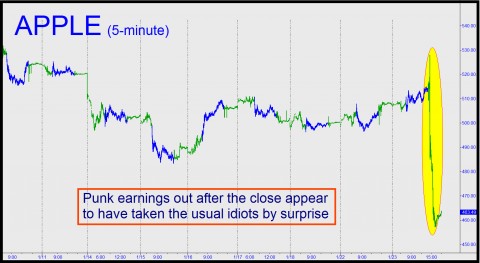 So why did AAPL shares initially feint higher on such rotten news, as the chart above shows? The evidence suggests that more than a few of the nervous Nellies were drawn offsides when the ball was snapped. Remember, these are guys who, in order to to gain an infinitesimal edge over the competition, have come to depend on “thinking” machines that react at the speed of light. Under the circumstances, it’s not surprising that some of those machines would have jumped the gun with a poorly educated guess the moment the letters “Ap…” appeared on the tape.

So now what? Although the stock signaled even lower prices (i.e., $447, the “Hidden Pivot” support mentioned above) when it exceeded our target at $461, we don’t pretend to know how this will affect the stock market in the days ahead. Even so, it’s worth noting that the S&P futures had been struggling for two days to push above a longstanding rally target of ours at 1494.50.  The best they could muster, on Tuesday in after-hours trading, was 1491.50.

Will that turn out to have been a major top?  Quite possibly.  If not, though, there is another rally target above it with the potential to stop a nearly four-year buying spree that has routinely feasted on bear stew.  And above it there is yet one more Hidden Pivot target – for the Dow Industrials – that we’ll hold in reserve against a possible Mother of All Bear Traps. Want to see how high this die-hard permabear thinks the Indoos can go even as Europe and the U.S. sink into recession or worse?  Click here for a free trial subscription to Rick’s Picks that will give you access to the answer.  Then come over to the chat room, where you can ask subscribers how accurate our previous forecasts have been.  This is in lieu of P&L claims, which we shun and you should distrust.