Let Gold Do Its Job!

[A recent commentary here, Pass Line Bettors Finally Seven Out, drew a spirited response that included the post below. It is from Robert Moore, a forum regular and gold bull whose online profile describes him as “the obvious Pragmatist.” Mainly, says, Robert, its all about trying to protect one’s savings from theft-by-Government. RA]

Regarding the following, commonly held scenarios expressed within this lively discussion:  1) Catastrophic deflation, debt diminishes and debt-derivatives implode, versus 2) hyperinflation, as the the money masters print feverishly to prevent #1 above; or my personal favorites: 3) one, followed by two, which is nearly always countered with:  4) “No, you idiot, it will be two, followed by one.” There is the obvious fifth option that everyone overlooks, and yet not one person in a thousand will be honest with themselves as to why they overlook it. The fifth option is the unfettered (i.e., unencumbered, free-market) revaluation of that most contentious of non life-critical physical assets (yes, I mean Gold). 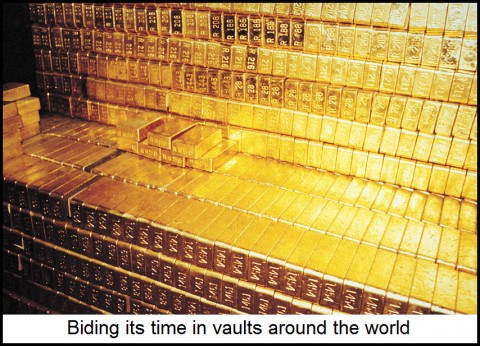 All the central banks need to do to restore faith is to get out of the way and let markets do what they have always done: clear themselves. The message that humanity is sending the Keynesian water-carriers is that “more debt will not restore confidence,” and I dare any of you to try and play God with me and declare that more debt will restore confidence.

No Debt Will Go Unpaid

There is a point where a burned lender will refuse to lend more, and there is likewise a point where a burdened borrower will refuse to accept any more burden. We (i.e., humanity) have passed that event-horizon. It is in the rear view mirror. The debts must be paid, forgiven, or defaulted, in order to start the process of restoring confidence. Period. The only reason this is not occurring (and is being fought so aggressively by bankers/lenders) is:  religion. Not Christianity, not Judaism, and not even Islam. The religion that the central bankers cling to as their jihadist rally-cry is Keynesianism. “More debt equals more happiness — just trust us on that,” they say.

Well, gang, it’s been five years, and the global “happiness” and “confidence” gauges have barely budged.  Everyone cheers when one of the gauges moves a hair off zero. Then we wail when it drops back. It’s ridiculous.  The only reason the credit-mongering jihadists refuse to step aside and let the markets work their magic is that They (i.e., the Keynesian academic powers that be) are terrified that doing so will spell defeat in a war of ideas with a bunch of unsophisticated, uneducated, uncivilized, fringe-lunatic, tinfoil hat-wearing Goldbugs.

However, the first rule in war is to know the enemy. The Western bankers will lose the gold war (or have already lost it) not just to the likes of Sprott, Rogers, Faber, Casey, Bass, et al. They have lost it to the majority of human beings who reside on this planet outside the periphery of central banking and the regulated economies of the West.

Gold is savings. Gold is money.  These ideas are embedded in people’s minds in India, Southeast Asia, China, Russia Africa, and even over a wide swath of South, Central and North America. Even the Japanese seem to know it. As to why propagandist elitists like Krugman, Summers, Bernanke, Rubin, Draghi et al. still think their war is worth fighting, the answer is not totally lost on me, however. The reason, quite simply, is nothing more than academic ego and pride. A pity that so many around the world will continue to suffer economically so that these sociopaths can continue experimenting with aggressive monetization that supposedly will be pared back someday in order to allow unrigged markets to flourish.

I say let Gold do its thing — blow the ultimate bubble; then pop; and, finally, restore human-driven concepts of value. To those who believe Gold prices would collapse if the banks let market forces prevail, then great!  Let the POG collapse. If the perceived high value of Gold must finally vanish from our psyches in order to usher in a new era of truly free markets, the price will have been worth it.  It’s long past time to restore reality and to get on with what’s important. Arguing about inflation and deflation is not.