Remembering Why We Hold Gold

The price of gold has been falling for more than two years, alleviated by the occasional sucker rally and a stretch of tedium in 2012 that made the year tolerable at best for long-term investors. Any complacency they may have felt back then was not to last, however, for quotes fell a further 30% between February and June. And although they initially bounced back sharply with a 20% rally that got airborne last July, the respite for investors has been short-lived, having given way to a wearisome relapse since late August.  Our technical runes now suggest that a washout to $1125 is possible. That would represent a 15% fall from current levels – enough, presumably, to elicit the kind of despair we typically associate with bear market bottoms.  Not that things will necessarily have to get worse before they get better.  For if gold were to forge higher in the weeks ahead, exceeding the 1487.20 peak highlighted in the chart, it would be well-primed for a rampage to $2000. My practice is to keep an open mind about such things, although as an investor I try never to put myself in the position of having to hope for them. 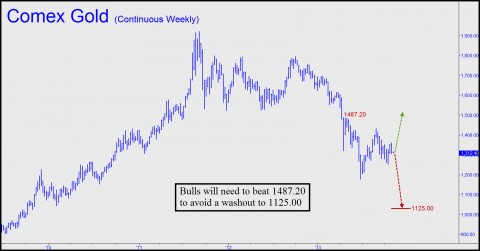 It’s not the technical side of the picture that should engage our earnest attention right now, but rather, ominous geopolitical rumblings. I credit my colleague Jim Willie with a visceral reminder that the global financial collapse is happening before our eyes. In his latest essay, Huge Cracks in the U.S. Financial Fortress, he sees a veritable armada of blacks swans threatening to undo the banking system.  This conclusion might seem extreme, especially to readers who believe such things only when they read about them in The New York Times or The Wall Street Journal. But only those who are blind to the obvious would say that Jim Willie has exaggerated.

Fill a Shoebox with Cash

He and I have had our differences in the past.  Jim Willie believes hyperinflation is inevitable, and although I tend to agree, I think it will come like a thunderclap after deflation has laid waste to the financial system.  In the past, we have both recommended holding physical gold against any and all possibilities. However, I also suggest keeping a shoebox full of intrinsically “worthless” paper currency to hedge against the ultimate deflationary event – i.e., the forced closure of U.S. banks for more than a day or two.  Although no one can predict what might cause this, we shouldn’t be in doubt of its likelihood.

If Jim Willie and I are in complete agreement about one thing, it is this: the dollar’s long reign is near an end. As he notes, Saudi Arabia is looking for a new protector for the Persian Gulf now that America has shown itself to be an unreliable ally. “The Saudis will soon announce acceptance for oil payments in euro terms, in yen terms, in British pound terms, and most important in Chinese yuan terms,” says Jim Willie. “The effect will be felt like a gigantic crash impact of a seven-story building hitting the ground, marking the Death of the Petro-Dollar.”  China is the country to whom the Saudis will turn, Jim Willie asserts, with hugely bullish implications for gold.

This is underscored by recent revelations at Goldseek.com that massive quantities of Western gold are being imported into China through conduits in Switzerland and Hong Kong.  At the same time, hedge funds have been liquidating gold ETFs, putting pressure on prices. Who benefits, and why?  It’s hard to tell. However, as the essay notes, “those who innocently own gold for asset preservation purposes can rest assured that they will never become collateral damage in these affairs as long as they do not allow themselves to lose patience or forget the reasons why they purchased gold in the first place.”

Indeed, with  bullion prices in a bear market that has persisted for more than two years, this is not the time for investors to throw in the towel. The cataclysm that Jim Willie has described so vividly may be postponed for yet a while longer, but not indefinitely. When the day of reckoning comes, any misgiving investors may have had in the past about sticking with bullion are certain to seem trivial.