In last week’s commentary, we opined that Twitter’s shamelessly overhyped IPO was the bell that’s supposed to ring when the stock market is at a major top. But that was before we’d heard of Evan Spiegel, a 29-year-old Stanford dropout who has single-handedly one-upped Twitter in three separate categories:  greed, hubris and stupidity.  It’s not what Spiegel did, but rather what he didn’t do, that tells us that stock-market mania may be at  an epochal high. In case you missed the story, which ran above the fold in The Wall Street Journal last Thursday, Spiegel snubbed a $3 billion offer from Facebook for the company he founded, Snapchat.  You say you’ve never heard of them?  But then, why would you have?  The software firm makes a smartphone application that is used almost exclusively by teenagers to send messages and pictures to each other that disappear in ten seconds or less. Don’t you wish you were the genius who’d thought of this first?  (Question: Can the idea be adapted by a company that packages meals for dieters?) 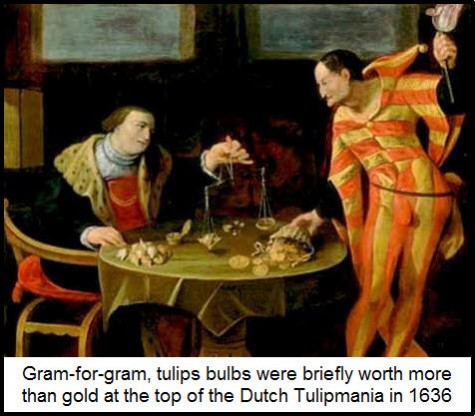 If you’re wondering where Snapchat’s profits will come from, you’re not alone.  Spiegel himself has yet to figure that one out.  Indeed, the company has no revenues, nor even a business model. But because there have been hundreds of millions of Snapchat messages flying hither and thither in cyberspace each day, that is deemed reason enough for the company to be in play as a red-hot buyout candidate.  Snapchat reportedly has suitors in China who are willing to invest at a level that would effectively value the company at $4 billion. But will even that be enough to satisfy Spiegel’s flamboyant brand of greed?  Perhaps not. He evidently thinks Snapchat’s user numbers have plenty more room to grow, and that the current, high levels of activity ensure that his software’s popularity won’t fade.

Before Spiegel passes up any more absurdly generous offers, we’d suggest that he read Mackay’s account, in Extraordinary Popular Delusions and the Madness of Crowds, of the South Sea Bubble.  History buffs may recall that in the early 1700s, the government of England, through the officially sanctioned South Seas Company, sought to boost revenues by granting exclusive charters to trading companies. Entrepreneurs lost no time dreaming up ideas on which large sums of money could be raised, in Mackay’s account, for such purposes as: insuring of horses; improving of gardens; trading in hair; erecting salt works in Holy Island; and, furnishing funerals to any part of Great Britain.  One hare-brained scheme in particular suggests that the arrant foolishness and gluttony of investors has remained constant over centuries. Consider the following prospectus, which raised a sum sufficient to have earned one very dubious company a place on Mackay’s list of bubbles: “For carrying on an undertaking of great advantage; but nobody to know what it is.”

Someone ought to tell Spiegel that whenever folly has reached such celestial heights, a collapse in confidence has not been far off.  No better example could be found than the Dutch Tulipmania that summited in the winter of 1636. At the time, tulip-crazed speculators bid up some rare bulbs to levels that equated to ten times the annual earnings of a skilled craftsman. Trade data suggest that the top of this mania occurred in the winter of 1636, and that the subsequent collapse reached full force by early February, 1637. If peaks in human folly are assumed to be roughly equal from one era to the next, that would imply the current mania will implode by no later than January of  2014. You’ve been warned.