Why We Should Be Nervous When Stocks Fall

Despite the poor start to 2014, there is still room to debate whether U.S. stocks have entered a bear market. My own forecast, made several months ago, calls for a final Dow run-up to 17622. I’d need to revisit that scenario, however, if January’s weakness gathers force in the weeks ahead.  One thing’s for certain:  If a bear market has already begun, the jig is up for the Fed’s crackpot scheme to borrow our way back to prosperity.  It will instead be Katie-bar-the-door-time – and deflation, here we come!  Japan will at last have company – not just from the U.S. and Europe, but from China, whose bubble-blowing days would not survive even a month  of U.S. recession piled atop the already suffocating weight of Europe’s deepening deflation. 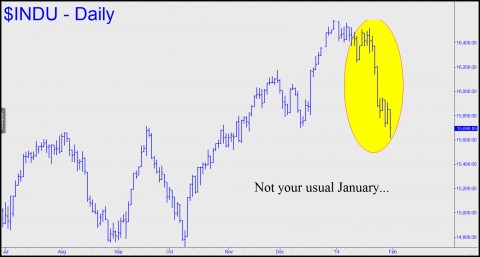 As for the stock market, the dam could burst at any time with unimaginably destructive power. Keep in mind that the main catalyst for rising share prices is not bulls betting on a brighter tomorrow, but bears covering short positions gone awry. Indeed, merely bullish buying is rarely sufficient to drive stocks through the thick layers of supply that accumulate just below each successive new peak. It is only when those who have bet against the stock market are stampeded by margin calls that this gravity-defying feat can be accomplished.  Meanwhile, as long as easy money and institutional mindset are present to keep stocks buoyant during quiet stretches, bears are held in a jittery state of alert, ready to cover short positions with market orders at the first sign of an outbreak of irrational exuberance.

The bears also tend to be too-eager buyers on the dips – exactly what we’ve seen so far this year.  Each time they do so, however, the strength of short-covering grows a little more depleted.  Also, bears who use put options to play the downside  – who have probably been buying puts for years, only to see them expire worthless more than 90% of the time – are prone to cash out winners prematurely, settling for meager profits just ahead of the real trouble they’ve all been expecting more or less forever. That is exactly what happened in 1987, leaving the stock market crucially low on short-covering power after the Dow dropped an unprecedented 108 points on Friday, October 16.  The many traders who took profits at the bell manifestly failed to imagine that this was just a warm-up for the 508-point selloff that came on Monday.

This time around, no one need be told that a bear market in stocks would douse the psychological bottle rockets that have kept asset markets glittering and which were intended by the central banks to boost consumer spending via the “wealth effect”.  Let stocks fall hard for just a few weeks, however, and the paper-asset world could start to unravel, subjecting mortgage rates to – heaven help us! — market forces. Since inflated real estate values constitute such a big piece of the collateral, such as it is, for a quadrillion dollar card-house of dubious swap agreements and repos, it’s logical to assume that the derivatives market itself would be sucked into a deflationary black hole.  This would almost surely happen too quickly for the central banks to take effective inflationary countermeasures.

In the meantime, virtually all instruments of paper wealth are coming under increasing strain because of a mere $10-billion-per-month “taper” by the Fed. While the change in policy has had little discernible effect on the U.S. economy, it has generated enough nervousness around the world to cause a small upward adjustment in the rates that have fed the global derivatives behemoth.  Considering the size of the market, it’s conceivable that a mere 20 to 30 more basis points of forced tightening could cause the whole shoddy edifice to unwind (i.e., deflate).

And that is why we should be more than a little nervous to see stocks falling for a rare change as the new year begins.