Privatized Highway No Bargain for Taxpayers

This is a cautionary tale for anyone who thinks public-private partnerships are a great way to build highways without burdening taxpayers. That’s what Coloradans thought when a $552 million expansion of the 24-mile Boulder-Denver Turnpike got under way two summers ago. The east-west thoroughfare originally opened as a toll road in 1951, but the toll was dropped in 1968 when the bonds were paid off early. Expectations were that U.S. 36 would carry 3,000 cars a day by 1980, but by the mid-1960s daily traffic was averaging nearly five times that. It has since gotten much worse, and currently as many as 124,000 vehicles use the road each day, packed bumper-to-bumper during the commute.  In 2005, U.S. 36 was ranked as the worst “heartburn highway” in the state, based on poor maintenance, congestion and accidents. 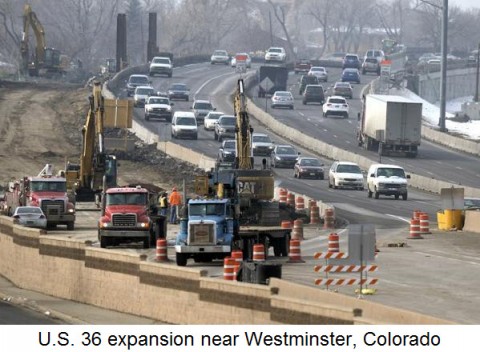 The solution? A state-of-the-art reconstruction that when completed early in 2015 will be an urban planner’s dream.  The highway will feature a special fast lane for high occupancy vehicles, bus rapid transit service, an electronic toll system for single-occupant cars and a bike path. Sounds like a winner for everyone, right?  Think again. Although the road itself cannot help but improve the flow of traffic, at least for some commuters , the way in which it was approved and financed carries the stench of Tammany Hall. Consider the following:

It’s no surprise that CDOT kept the negotiations under wraps, since public scrutiny would have caused a political firestorm capable of stopping the project in its tracks.  But when some of the details came to light a month ago, Transportation Department spokeswoman Amy Ford had to lie through her teeth  to give her employer cover at the eleventh hour. Shades of Obamacare!  She claimed, among other things, that the contract could be amended if needed; that there were no alternative sources of funding; that public funding would have delayed the project by 20 years; and that the contract contained no non-compete clause to prevent surrounding communities from upgrading roads or transit systems near U.S. 36.  All of these statements were subsequently proven to be false, but it was too late. With the public clamoring for CDOT scalps, the department hastily signed the contract without holding any hearings, clinching a lucrative 50-year deal for the operator. Noted one observer, “The private financing is essentially just a high-priced loan. Instead of raising more of their own public revenue to finance the road, the state will make larger annual payments to the private road builders.” Far from unburdening taxpayers, this public-private partnership could conceivably have swindled them.

And now for the $64,000 question: Who do you think arranged the deal and furtively steered it through the political shoals with such consummate skill?  Go to the head of the class if you guessed Goldman Sachs — this time partnered with an Australian toll-road developer called Plenary Group. Combine the unstoppable force of the U.S. highway lobby with the political clout and savvy of Goldman, and a project like this one could soon be coming your way. Forewarned is forearmed.