A Warning to Those Grown Bored with Gold

I’m starting to warm once again to gold. Like many of you, I never gave up on it, I just grew too bored to care. With the bear market in bullion about to enter its fourth year, who could be blamed for losing interest?  Gold has looked so punk for so long that every time it rallies sharply, I get that nagging feeling, as you probably do, that we’re about to get sandbagged for the umpteenth time.  So why the change of heart? All credit to Richard “Doc” Postma, a friend and regular guest panelist with me on interviews with the (Al ) Korelin Economic Report. Doc, a physician by training, is also an astute investor and market timer. A patient sort as well, he is that rare bird who can watch and wait for months or even years while exceptional opportunities slowly take shape. I hasten to add that on more than one occasion, he has been a crucial step ahead of me in calling some important price swings in gold. Naturally, that got my attention. 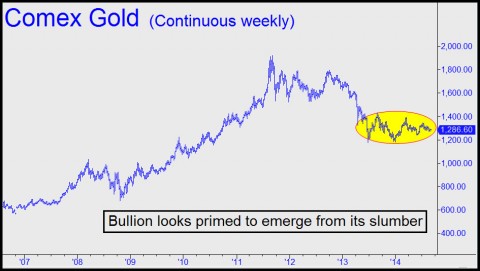 He now thinks gold and silver are about to take off — as soon as late September or early October.  The very idea of it caused me to look with fresh eyes at my charts for corroborating signs.  The inescapable conclusion is that Doc is onto something. The evidence is there for anyone who cares to look. For one, bullion continues to hit marginal new lows, but without breaking down.  Rallies have been fleeting, followed by slumps that continue to wear down even gold’s most loyal followers. Most telling of all, mining shares have shown increasing reluctance to give ground on days when demand for physical is weak.

Although the meaning of these signs when taken together seems clear to me now, I might have missed the big picture had I not sat down with Doc to compare notes during a recent junket we took to a Nevada ore property under exploration by a company called Idaho North Resources (OTC: IDAH). In the course of an extended conversation we had on the flight back to Denver, we discovered just how closely some of our timing ideas match up. He sees gold and silver correcting just a little more before they take off. Likewise, I’ve been looking for at least somewhat lower lows in Comex gold and silver, as well as in some widely watched mining stocks. In one case, Silver Wheaton, a stock that is popular with Rick’s Picks subscribers, Doc’s correction target and mine are just a penny apart.  SLW settled on Friday at 24.73, but we both see it falling by a further $1.00 before it can form a lasting bottom.

But it is the broader picture of a precious metals sector bottoming quietly that is most compelling. This is how bull markets often start.  First, the bear breaks the spirit of even the most steadfast bulls by declining relentlessly for an extended period of time. The dirge is invariably punctuated by strong rallies that raise hopes briefly before dashing them on the rocks with equally sharp selloffs.  When the inevitable bear rallies come, investors have grown conditioned to greet them with a shrug.  Over time, fewer and fewer gold bugs will possess the energy or conviction needed to buy precious-metal assets when they are moving higher. This is understandable, given that all of bullion’s rallies over the last three years have failed.

One of These Days…

One day these days, however – and perhaps sooner than many erstwhile gold bugs expect — bullion is going to blast off and not pull back. Most will take it for just another sucker rally; they will ignore it and brace for the selloff that always seems to follow. Instead, gold will continue on its rampage for yet a few more weeks before it dawns on doubters that perhaps it’s different this time. By then it will be too late for them. Gold’s price will have increased by perhaps $300 to $400 in the space of a month, and any investor who hesitated will be frozen in place, psychologically unable to pay up. That’s because buying on weakness over the past three years has earned them only pain and anguish.

Those who were around when the August 1982 bull  took off with a breathtaking leap will recognize similarities to the current precious metals market.  Back then, in the doldrums of one of the most stultifyingly boring summers imaginable, stocks exploded higher one day for no apparent reason; then they continued to run up…and up…and up, with barely a pause until October 1987.  It is from the depths of such asphyxiating tedium  as we now see in bullion that great bull markets sometimes emerge.  If you are going to be ready for it, as opposed to choking on its dust when it bolts for the blue, you had best do your buying now, while stocks continue to firm up oh-so-quietly above their bear-market lows.