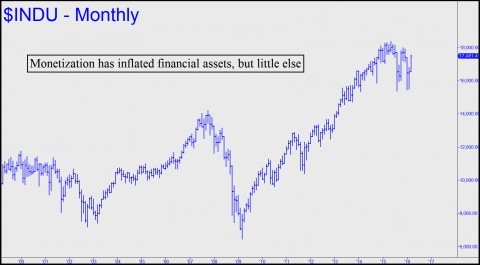 [The following was posted in the Rick’s Picks forum on Wednesday by a regular contributor who goes by the handle ‘None’.  I am republishing it below because it deserves a wider audience.  RA]

While doubts are rising about central banks actions, there is still residual complacency, lack of awareness of the potential dangers of the current policy path and, more importantly, not enough efforts to articulate a more promising alternative. Central banks purchases of public and private debt titles were certainly justified as an emergency measure to backstop the imploding global credit system at the depth of the panic end 2008 – early 2009, the culmination of 35 years of consistently rising debt loads.

The mistake was to pursue these credit easing policies once the emergency had passed to make them structural and still lasting eight years later. At the Fed, Bernanke took the opportunity to demonstrate the validity of his theory expressed in his famous November 2002 speech “deflation, making sure it doesn’t happen here”. All the measures outlined in the speech have been put into practice. Most of his counterparts around the world followed. And we saw the results of this large-scale real life experiment: after a brief boost in 2010-2011 as newly created money flowed into commodities, inflation quickly fell back to 0% pretty much everywhere. No deleveraging occurred. Instead, global relative debt is higher than in 2007. The theory had been empirically tested … and proven wrong.

Debt Growing into a ‘Killer Wave’

Worse still, monetary creation by central banks (or by commercial banks under policymakers instructions like in China) have only ensured the next deflationary wave. Indeed, by distorting price signals in commodities markets and asset values, and by inciting agents with still strong balance sheet to leverage up, liquidity injections triggered a massive debt-financed investment cycle. Offshore dollar-denominated debt surged by $9.5 Tr since 2009 according to the BIS. China debt has been expanding at nearly +20%, nearly twice as fast as nominal economic activity. Many countries have been experiencing massive credit-driven real estate bubble (Australia, Canada, China, Norway, Sweden, etc.). In the US, the shale oil sector saw a credit-financed gold rush. Seven years later, developed markets have not deleveraged while many emerging markets have materially leveraged up. Global relative debt is higher than in 2007. Confronted to falling commodity prices and/or to rising dollar or dollar-pegged debts, these borrowers are now under financial stress. Rising credit risks triggered the beginning of a worldwide credit contraction during 2015, defeating previous central banks actions and forcing them to renew and increase their interventions. The snake is biting its tail, going nowhere.

The actual outcome is the opposite of what was predicted: “deflation, making sure it happens everywhere”. Central banks across the world are now locked in an headlong flight with no exit and in a conflictual dynamic of competitive devaluations to try to export deflationary forces they themselves exacerbated to trading partners. While several trillions of debt securities are yielding negative interest rates and exchange rates are jumping all over the place, global trade has barely grown since 2012, global PMIs have been lackluster and under-employment has barely receded from socially destabilizing levels. Currently, the global punching ball is the US as dollar strength means the US is shouldering most of the rest of the world excess debt despite being the main current account deficit country. At the time when the Fed would like to normalize monetary policy, the fundamental contradiction between the use of the USD as domestic currency of the US and as main international reserve instrument is plainly visible, though nobody has apparently much to say about that.

All this delicate situation for having refused to consider – for whatever reasons – the root causes of the problem, which is the imbalanced international trade and monetary system, whereby cross exchange rates are far from levels consistent with cross trade balances equilibrium, thereby enabling salary arbitrage eroding global demand and enabling duplication of credit between deficit and surplus countries feeding the global debt snowball, the two combining into a growing deflationary force weakening the real economic growth trend and increasing the debt load.

Those who “saved the world” in 2008 have been unable, for lack of a correct diagnostic, to formulate a structural policy agenda to deal with the root causes of the problem beyond emergency measures. The G20 has proven itself useless, ruling out any change to the global trade and monetary system on its very first meeting. As a result, policymakers are now leading the world into a dangerous impasse where the same unsolved problem is defeating their increasingly destabilizing policies. All that in a rather strange atmosphere of falling credibility, residual complacency, and increasing rejection of established political parties.

A much more promising path would be to restore balance in the international trade and monetary system so as to make international free trade mutually beneficial and so as to avoid duplication of credit between debtor and creditor countries arising from large and persistent current account imbalances. This was the secret of the “Thirty Glorious” after WWII, incorporating the lessons from the mistakes made post WWI which led to the unbalanced growth of the 1920’s onto the Great Depression. The diagnostic is easy to establish, though rarely acknowledged. It is only a matter of willingness to restore and improve such a balanced system. This is of course what is expected from policymakers : to design and maintain a functional economic and financial system. To do “whatever it takes” to perpetuate a dysfunctional system can only lead to a loss of credibility. This is where we are now. Which means time is running short.