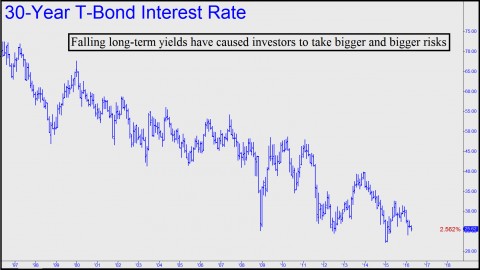 The tedious price action that ended Wall Street’s week paradoxically left denizens of the Rick’s Picks chat room as keyed up as I’ve seen them in a long while. Opinion seemed evenly divided on the question of whether stocks are about to blast off into hyperspace, or tumble into a deflationary abyss as deep and destructive as the 1930s Depression. I cast my vote resolutely with the latter, although I would have to concede that a blowoff spike sending the Dow Industrials above 20,000 is at least theoretically possible. For where else is an investor, or a dot-com company with a mountain of idle capital, to turn with yields on 40-year bonds heading toward 2% or lower, and returns on shorter-term paper at zero and sinking? This poses quite a problem for the leviathans of the investment world — pension funds and insurance companies in particular, since they are on the hook to pay out sums in the future that will overwhelm today’s meager returns.

Still worse is that the monetary stimulus the central banks have applied to jump-start the economies of the world is not working, not even a little. And yet, the charlatans who run the banking system, unwilling to acknowledge the devastation they have  wreaked on savers, apparently still believe that pushing interest rates even deeper into negative territory will eventually float everyone’s boat. This epic delusion flouts not just common sense, but reality. For any fool can see that the radical policies pursued by the central banks have created a magnet for malinvestment on an epic scale, feeding a speculative mania that can only end in disaster.

The pension problem, which my colleague Mish Shedlock has written about at length, perfectly reflects the lose/lose outcome of a deflationary bust. For in the end, every penny of every debt must be paid — if not by the borrower, then by the lender. This elemental idea was most forcefully stated by C.V. Myers in his prescient 1976 book, The Coming Deflation.  Where pensions are concerned, liabilities have piled up so high that no one, least of all the twenty- and thirty-somethings now paying into the Social Security system, expects retirement promises to be kept. It is quite clear even now that would-be beneficiaries under the age of 55 are all going to get stiffed.

In these all-too-interesting times, is there a case to be made that stocks will continue to muddle sideways indefinitely? This seems unlikely, given that traders are so wildly divergent in their views right now. Then again, if Mr. Market’s greatest delight lies in causing bulls and bears alike to suffer as much pain as possible, a do-nothing market would be as effective in achieving that result as the Chinese water torture. Whatever happens, we should have no illusions about escaping the quadrillion-dollar black hole of deflation that the banksters and ‘Government’ have colluded to create in the name of ‘stimulus’.